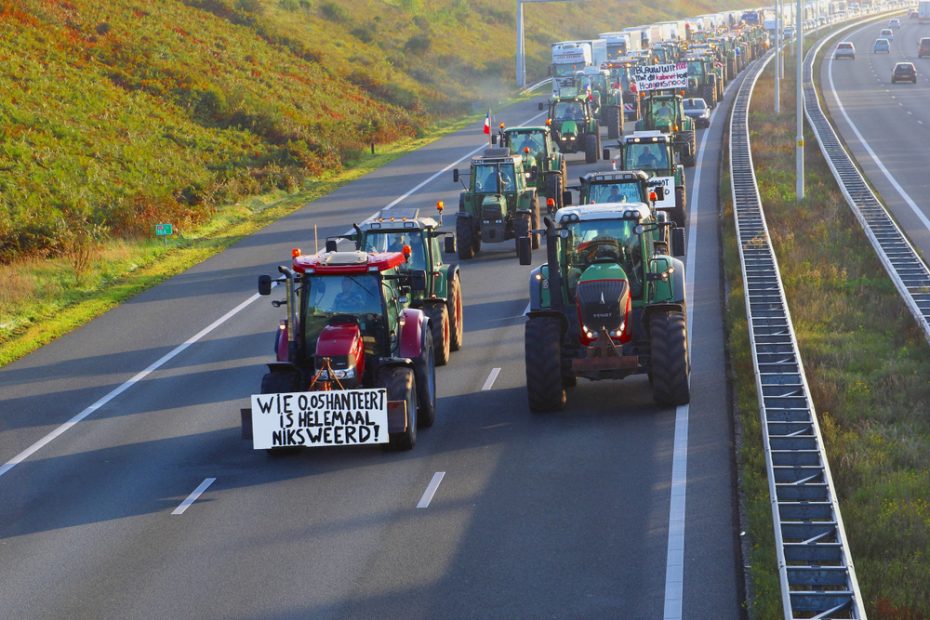 European Union regulations have real-world consequences, and farmers in the Netherlands and other parts of Europe are in an uproar about it.

Will the left’s globalistic agenda continue to plunge ahead despite the few brave farmers putting up a fight, or will the world see that the left is orchestrating a colossal power grab from the people? A lot is riding on this little know protest propagated by ordinary people driving tractors.

Netherland policymakers are serious when it comes to climate change. They are pushing farmers to reduce the amount of nitrogen oxide and ammonia emissions that come from fertilizers and livestock.

In 2019, the highest court in the Netherlands warned the government to take action on environmental issues. Of course, there had been protests and outrage by farmers then as well.

Now the government is passing laws to put farmers out of business if they don’t comply with the emissions reductions. Their reasoning for pushing their agenda is that farmers have until 2030 to cut emissions by 50%. If they don’t, the government fears the current emissions levels will destroy endangered plants, protected habitats, and wildlife across Europe.

The Dutch farmers feel threatened as the government’s plan to go ‘green’ could see an estimated 30% of the country’s farms close down due to the restrictions. In their anger, some of the farmers have tried to block food distribution centers in an effort to protest the left-leaning government’s long, overreaching arm of left-leaning socialism, AKA, communism.

Farmers have been using blockades, setting bales of hay on fire, and even spraying manure at government officials’ doorsteps to have their voices heard.

🚨🚨⚠️⚠️
The Dutch protesters are pouring manure on government offices, flooding streets, and becoming all together ungovernable. This uprising is in response to the WEF controlled government shutting down farms to "save the planet." You have to see this: https://t.co/YTyax7uagm pic.twitter.com/mXgufQfkRM

Police in the Netherlands have taken a heavy-handed approach to the blockades as they do everything in their power to infiltrate protests, tear down blockades, and arrest protesters.

This is what happened when the undercover police tried to infiltrate the Dutch farmer's protest#boereninopstand #DutchFarmers #Protest #TrendingNow #ViralVideo pic.twitter.com/Nk0fqsIsw1

In a video posted to Twitter, police can be seen shooting at a 16-year-old driving a tractor away from a protest. They later arrested him for attempted manslaughter but released him after footage from the scene became available.

Farmer #Youke Interview (SUBTITLES). The initial police narrative was that Youke rode into the cops, but in light of ample incriminating footage of the officers involved they had no choice but to release him. #dutchfarmers #boereninopstand #politiegeweld #Netherlands #shooting pic.twitter.com/886FtHHURs

Protests have not only been happening in the Netherlands. Similar protests have been popping up in Germany, Italy, and Poland.

What started with the Dutch has spread to Germany, Poland, and now Italy as farmers collectively rise up to protest their governments' destructive climate policies that threaten livelihoods and the global food supply. https://t.co/mU73CzNUw4

This could spell big trouble for the food supply in Europe as the farmers protest across the EU and Ukrainian farmers fight for their own survival.

As a side note, all this upheaval is happening as Bill Gates continues to buy up farmland in the USA.

Or is it a side note? It’s no secret that Bill Gates believes the world population needs to be controlled. With Dutch Prime Minister Mark Rutte entirely in line with the left’s agenda, maybe the Dutch farmers are on to something.

A young Dutch #politician, Gideon van Meijeren, shows everyone who Mark Rutte, the PM of the #Netherlands, really is and helps shed more light on what lies beneath the #covid19pandemic. Thank you, Mr. van Meijeren. And bravo!

The Washington Examiner has reported that the Dutch farmers are rejecting the government’s terms for a dialogue.

“In its letter to the Dutch government, the association explained its members are open and willing to enter negotiations, but not on the grounds the government has laid out. It rejected the offer on the grounds that the government isn’t showing willingness to discuss a change in goals or principles, as seen in a parliamentary discussion regarding the affair, and stressed that both parties will have to be willing to move if negotiations are to take place.

The failure of negotiations risks further escalating the protests.

Dutch farmers started massive protests in June following the passage of a proposal in Parliament that sought to cut damaging pollutants drastically. The measures intended to slash nitrogen oxide and ammonia could force farmers to reduce their livestock greatly or lose their livelihoods altogether. “The honest message … is that not all farmers can continue their business,” the government said in a June statement.”