Zeus Angered??? Lightning Strikes And Injures Many Outside White House 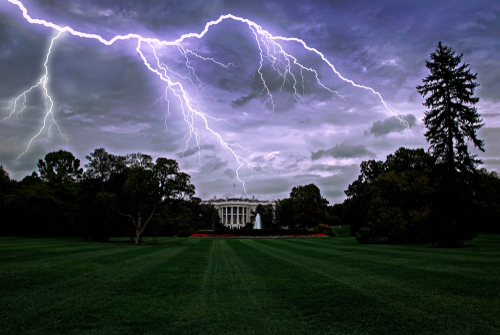 Some citizens of the United States have been rushed to the hospital after sustaining critical injuries from a lightning strike just in front of the White House. The fire department immediately dashed to their rescue as they tried to save all 4 people involved in this unfortunate incident.

While talking to the press, the fire department said that the four people were found about 100 feet away from the statue of Andrew Jackson in Lafayette Park. This park and its seven surrounding acres, known as Lafayette Square, are located across the street from the White House. The reason why these people were at the park at that time was unknown, as the National Weather Service had put out a thunderstorm warning between 6:30 and 7:15 pm.

While assessing what could have happened, a meteorologist and lightning specialist, Chris Vagasky, explained that 6 individual lightning bolts had hit the same point near the White House in less than half a second at the same time, as it was a 6-stroke flash.

Lightning strikes RIGHT in front of the White House pic.twitter.com/Kg6YJWnCNu

Two adult men and two adult women had all sustained life-threatening injuries, but we were immediately moved to the closest hospital. One of the testifiers had described the strike as massive as she said it sounded like a bomb was going off. The fire department spokesman Vito Maggiolo said at a news briefing that “Trees are not safe places. Anybody that goes to seek shelter under a tree, that’s a dangerous place to be.” The patients were found at the center of the park, where they had taken shelter in the grove of trees.

“This statement is being made inside of a vehicle due to was significant storm conditions that are currently taking place in the area. At 6:52 pm, D.C. fire and EMS received a report of a lightning strike in Lafayette Park with multiple patients. When we arrived, we found a total of four patients. There were two adult males and there were two adult females. All four were suffering from critical life-threatening injuries,” a spokesman for  DC Fire and EMS said in a video posted on social media. This was about an hour after the patients were rushed to the hospital.

“We were able to quickly treat and transport all four patients, and they were all taken to area hospitals. We want to make note of the fact that uniformed officers from both the United States Secret Service uniformed division, as well as the United States Park Police who witnessed this lightning strike. We want to thank them for immediately responding to the scene and rendering aid to the injured individuals,” the spokesman added.

The National Weather Service had, however, noted that “Over the last 30 years (1989 – 2018) the U.S. has averaged 43 reported lightning fatalities per year. Only about 10% of people who are struck by lightning are killed, leaving 90% with various degrees of disability,” and hopes these patients miraculously recover and return to their daily lives.