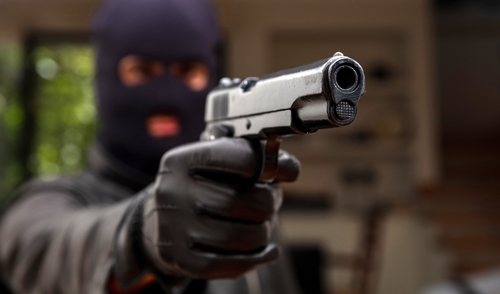 A good rule of thumb is to not steal from people. Whether you’re a banker and they’re a client or you’re a young hoodlum and the opposite party is the owner of a small shop, stealing is rarely a good call, both from a morality and not getting stabbed/shot/otherwise terminated perspective.

And that last factor has come more and more into play following the summer of 2020 “Summer of Love” protests, where store owners that weren’t ready to defend their businesses from hordes of rampaging thugs saw their life savings go up in smoke.

Well, now more and more store owners have woken up and gotten ready to defend themselves and their businesses from those who would prey on them, with one of the more high-profile recent examples of that coming from Las Vegas, where a store owner was forced to defend his livelihood with a knife from a group of masked thugs that attempted to rob him.

Shortly before the video begins, a duo of masked assailants entered the store wearing masks, and the store owner, identified as a man named Nguyen, asked ”Why are you guys wearing masks like that?” as they approach the counter.

They didn’t respond, of course, so held told them to “just leave.”

But they didn’t just leave. Rather, one took the tip jar from the store and started heading out, but another masked thug jumped over the counter, presumably to take whatever was behind the glass.

Nguyen, who obviously felt threatened by that, grabbed a sharp object and defended himself, stabbing the would-be thief multiple times as the young assailant cried “I’m dead, I’m dead.”

Explaining why he resorted to deadly force during the robbery, Nguyen said:

“At first I thought they were normal customers and then I realized they had like ski masks on. I had to assume they had a firearm so I just wanted to make sure I could protect myself.”

He added that though he couldn’t see a firearm, he “couldn’t take that chance,” and so had to defend himself from the masked assailants before they could draw the gun he presumed they had.

Adding more details about why he feared for his life while speaking to the New York Post, Nguyen said “I was scared for my life. When they came in, one of them had a bag in front of him like he had a firearm or something. I didn’t have much time to think. I grabbed my knife right next to the register.”

Commenting on what happened after the stabbing, Nguyen told the New York Post:

“I remember him saying, ‘Please don’t let me die.’ He said he was sorry. By that point, he took off his mask himself. I was trying to get on the phone with the police when he was trying to talk to me. I just ran and wanted to make sure the police and ambulance would get here on time.”

“Small business owners like us, this is our livelihood. Not only are they threatening our lives, but our livelihood, so we have to stay vigilant.”

And staying vigilant is exactly what he did, so both he and his store are safe.