WATCH: Royals Gather on Buckingham Palace Balcony for Trooping of the Color WITHOUT Harry & Meghan 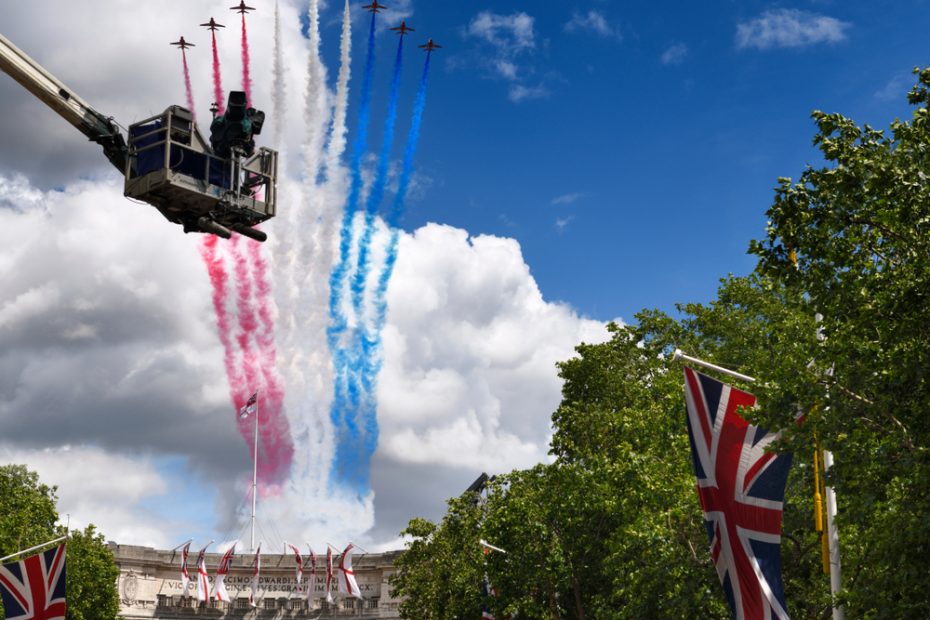 The Royal Family gathered on the balcony of Buckingham Palace today in front of thousands of cheering on-lookers as the first of the 4-day Jubilee celebrations begin.

The 96 year-old monarch is celebrating 70 years of service to Britain and the Commonwealth. Celebrations, street parties and events will take place all across Britain as the public enjoy a 4-day weekend.

The Cambridge children George, 8, Charlotte, 7, and Louis, 4, bowed their heads as the national anthem played. They arrived with their mother, Kate, who wore a white coat-dress by Alexander McQueen, in a stunning carriage.

After the parade, the senior Royals including the Cambridge children gathered on the balcony alongside the Queen to watch the RAF Red Arrow flypast.

The Queen, who wore a Guards brooch and blue Angela Kelly outfit smiled and chatted to her family as she took in the events unfolding below her on Horse Guard’s Parade and in the bright blue skies above her.

She reportedly explained “incredible!” as she looked down at the military parade. The Queen returned with senior Royals including her son Prince Charles, Camilla, Prince William, Kate Middleton and their children around half an hour later to watch the RAF Red Arrows fly-past.

The planes reportedly delighted the youngest there, Prince Louis who is fifth in line to the throne behind his elderly brother George, his sister Charlotte, his father William and grandfather Charles. Louis comically put his hands over his ears and pulled a face as the planes flew over leaving red, white and blue smoke trails in the sky.

The three youngsters happily chatted to their beloved “gan-gan” and waved enthusiastically to the crowds.

Fighter jets from the Royal Air Force also formed a huge “70” in the sky above the palace to the delight of thousands of members of the public – many of whom waved Union Flags and dressed in party hats and tiaras as they assembled down the Mall.

So far, the controversial Sussexes have not made an appearance and have kept an abnormally low profile since touching down in the UK from Los Angeles yesterday afternoon and are reportedly staying at their UK residence Frogmore Cottage in Windsor.

It is expected that Harry and Meghan will participate in other events over the course of the weekend, including the BBC’s special Jubilee concert outside the palace which will include performances from Sir Elton John among other stars and will join other Royals tomorrow morning in a church service.

This will be the first official royal engagement for the Sussexes in two years after they moved to Hollywood to enjoy a more private life. Their children, three-year-old Archie and Lilibet, one on Saturday, will get the chance to meet their young cousins and Royal relatives.

Archie has not been in the UK since he was 6 months old, and it will be the first ever time in the country for Lilibet.

Meanwhile, Prince Andrew will not be permitted to attend of the events.

The Queen has asked Britain to use her Platinum Jubilee to create “happy memories with friends and family”.