Watch: Rams Bobby Wagner Shows How We Handle Protesters in the States, Will Not Face Charges 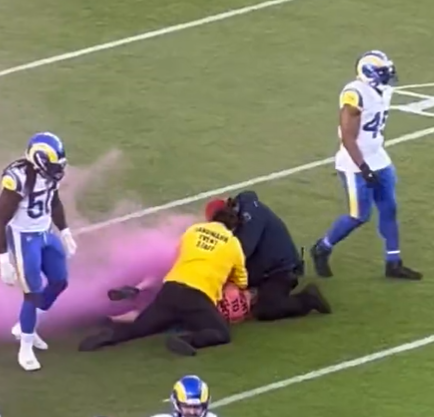 Protesting is the hot new trend. Not protesting real issues like antisemitism or political chicanery like what happened in Arizona, but rather protesting small stuff like animal rights and climate change. There were numerous incidents at high-profile sporting events in Europe over the summer that included protesters setting themselves on fire, chaining themselves to the net of a tennis match, and running on numerous soccer fields. While the Europeans sit back and politely watch it happen, that’s not how we roll in the USA.

This season at a Los Angeles Rams versus the San Francisco 49’ers game, a skinny girly man who was running like he had rental legs darted across the field carrying some pink, smoking canister. Only in San Francisco. Since security at NFL games has so much to account for already and isn’t exactly as athletic either, the Rams’ Bobby Wagner decided to lend a hand. And shoulder pads. Check this out.

This is how you handle this incident. Granted, Wagner is 6’0 and 240 pounds and the protester looks to be no more than a buck-forty soaking wet, but if you run into a lion’s den at the zoo, the lion is going to do lion-type things. You can’t blame the lion or a Ram for lowering a shoulder and detonating on you. Who knows what this skinny-leg lunatic could be carrying? My suspicion would be nothing more than a vaccine card and maybe a gift card from Starbucks with five dollars left on it, but one doesn’t know. Since security was clearly playing Keystone Cops, Wagner just offer a helping shoulder. Predictably, the low “t” protester filed police charges.

Alexander Taylor – who was protesting for an animal rights organization – reportedly told police that he suffered a concussion, a headache, and a burn on his arm after being taken down by Wagner.

Santa Clara Police told TMZ that after its own investigation into the incident, it “did not file charges with the Santa Clara County District Attorney’s Office.”

Kudos to the Santa Clara District Attorney for making the right call here. Wagner did what needed to be done to stop the situation and prevent any potential harm for both the protester and players and league employees on the field. Protesting is our right, and is perfectly acceptable, regardless of how stupid your cause is as long as it is done in the correct manner. Assaulting people (BLM), throwing paint on people as PETA has been known to do, and destroying and trespassing on private property (BLM again) is not acceptable. Wagner defended his actions by saying this.

It has been a frustrating season for the defending Super Bowl champion Rams, and likely Wagner relieved a little frustration taking out the protein deficient protester, but in the end the protester was fine, and justice was served. With no meat, of course.