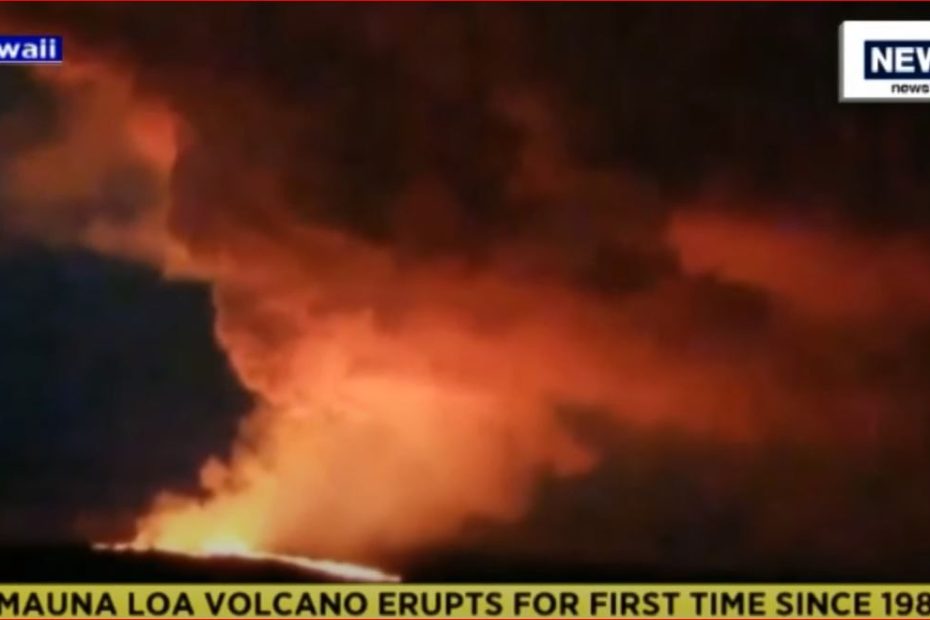 New aerial film showing the lava flow from the summit of Mauna Loa, the largest active volcano in the world, on Hawaii’s Big Island, was released by the U.S. Coast Guard on Monday.

The U.S. Coast Guard Hawaii Pacific C-130 military plane used video of the lava flow’s advancement to share it with the public, noting that this is the volcano’s first eruption since 1984. The longest period of silence ever recorded for Mauna Loa came to an end with the eruption on Sunday night.

According to the Hawaii Volcano Observatory, the eruption started on Sunday at at 11:30 p.m. HST in Moku’weoweo, the summit caldera of Mauna Loa. Although lava is pouring down one side of the volcano, there is currently no sign that the neighboring settlements are in danger, according to officials.

Hawaii Gov. David Ige and Mayor Mitch Roth emphasized at a press conference that while some individuals made the decision to voluntarily leave their homes, there have been no evacuation orders and all schools would remain open.

Visitors who have reservations for excursions to the Big Island do not need to change their plans, according to the government.

The first eruption of Mauna Loa in almost forty years, according to the source, is anticipated to boost local businesses’ winter tourism.

The National Weather Service in Honolulu has issued an ashfall advisory for several areas of the Big Island.

According to the U.S. Coast Guard, shelters have been set up at Kekuaokalani Gym, Kailua Park in Kona, and Robert Herkes Gym in Pahala as a precaution.

Lt. Eric Juback, D14 command duty officer, said in a statement that the U.S. Coast Guard Joint Rescue Coordination Center Honolulu had received a call from the Hawaii County Civil Defense Agency requesting assistance for a C-130 from Air Station Barbers Point to conduct an aerial observation flight of the eruption with partners from the U.S. Geological Survey and officials from the State and County. “The Coast Guard values these inter-agency relationships and stands ready to support emergency operations throughout the Hawaiian Islands if able,” it says.

A C-130 Hercules aircrew from Air Station Barbers Point was requested to assess the situation, and they flew over with Mayor Mitch Roth, the Hawaii Civil Defense Agency, the U.S. Geological Survey, and other state and county authorities. At that time, video was captured from the C-130.

Live webcam feeds of the top of Mauna Loa and the northeast rift zone from Mauna Kea are also being broadcast by the Hawaiian Volcano Observatory.

The lava flow from Fissure 3 has proceeded north overnight to cross the National Oceanic and Atmospheric Administration Mauna Loa Observatory Road, according to a tweet from the U.S. Geological Service (USGS) on Tuesday morning. Two new flows are traveling north along Fissure 3’s rift.

At 3:27 a.m. local time on Tuesday, a magnitude-4.0 earthquake that was 20 miles below sea level and located 6 miles east of Pahala, Hawaii, was felt. The earthquake, according to the USGS, had no obvious impact on the current eruptions at Mauna Loa and Klauea and is unrelated to the eruption of Mauna Loa.