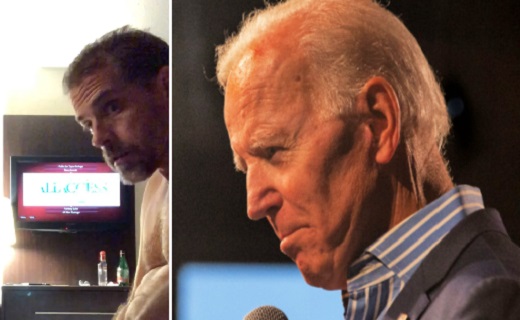 Hunter Biden’s ex-wife has revealed that she was embarrassed by her husband’s controversial financial deals but said she turned the other cheek because she “liked nice things”.

Kathleen Buhle, 52, opened up about her life with scandal-ridden Hunter to Good Morning America hosts on Tuesday as she promoted her new book If We Break.

Buhle married the (now) president’s son in 1993, and the couple divorced in 2017 after Hunter’s affair with his deceased brother’s widow Hallie. They have three daughters together and Buhle now receives $37,000 a month after the breakdown of their marriage.

“With addiction, especially, there’s so much shame surrounding it that it becomes something that we don’t talk about,” she explained to ABC interviewer Amy Robach.

Biden doesn’t like the media coverage he is getting.🤦🏼‍♀️

The conversation was moved on to Hunter’s very controversial laptop videos which show the president’s son taking crack cocaine and bedding numerous prostitutes. Buhle responded that she had no idea of the extent of her ex-husband’s issues:

“Not at all. He was struggling under a massive drug addiction and that’s heartbreaking and painful. That wasn’t who I was married to,” she said.

Buhle openly admitted she had turned a blind eye to Hunter’s financial dealings and had given him complete control over the family’s wallet, a decision she now bitterly regrets but was, at the time, enjoying a prestigious lifestyle:

“This was one of the harder parts for me to write and acknowledge. It’s embarrassing to say that I seeded all financial control to my husband. I liked nice things and I didn’t want to think about the cost at which they were coming,”

EXCLUSIVE: Kathleen Buhle, Hunter Biden’s ex-wife, to @arobach on his addiction issues: "He was struggling under a massive drug addiction. And that's heartbreaking and painful.” https://t.co/uKNXDXuD4y pic.twitter.com/dKXvfHKtyC

As Robach pressed her to admit if she had any involvement in Hunter’s deals with Ukrainian energy firm Burisma, Buhle said she had merely “buried [her] head in the sand” but refused to say if Biden had used his father’s name to broker deals:

“Trying to get someone to parse out what parts of their life came from their parents, in my mind, is not a healthy exercise.

“I think he has always acknowledged the benefit and advantage of coming from a prominent family.”

But when it came to discussing Joe and Jill Biden’s role as grandparents, Buhl said she had “never, ever questioned Joe and Jill’s love and attention to my three daughters. Divorce was hard on all of us because we were very close but we come together out of a shared love for my daughters.”

While she admits the Bidens do feature in the book, Buhle insisted that the story is about her life and her own regrets and life lessons:

“They were in my life in such a significant way but I really tried to keep it to what was my relationship to Hunter’s addiction, where was I in my marriage, and the choices I made to make sure that this is my story, the story of Kathleen Buhle”.

Buhle had been diagnosed with colon cancer as she was going through her divorce from Hunter, but she says she hopes the book will encourage other women to “understand your finances, take responsibility for them”.