Watch: Beatings on the Menu at Popeyes 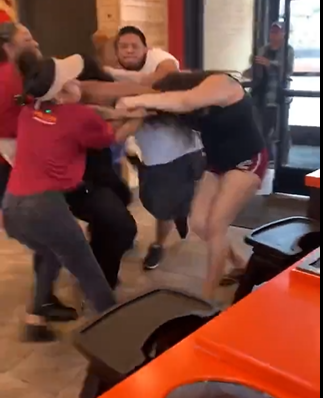 Things have been getting a bit out of control lately in terms of people just outright losing their minds and acting like savages. Times are tough around the country and people are under a lot of stress. Unemployment, inflation, Covid, crime, there are numerous reasons why someone might snap at any given moment. Getting the wrong order at your favorite chicken shack shouldn’t be one of them.

Popeye’s allegedly has some tasty chicken, though I have never tried it. I’m more of an old school KFC guy myself but considering the behavior of one young “lady”, that must be some damn tasty bird. That, or she mistook Popeye’s for the Sailor and decided to engage in fisticuffs. Bluto and Olive Oyl would be proud of this throwdown. Either way, check this out.

One woman at a Popeyes found out the hard way messing with restaurant workers is probably not a good idea.

An absolutely absurd video shows an altercation that started at the cash register when a customer and Popeyes employee both appeared to throw something at each other.

Let’s just put this out there, you should NEVER be rude to restaurant employees. These people work hard, often for very little money but more importantly they are preparing your food. That means they can do things to your food that you don’t know about until it’s too late. Yuck! No one wants something disgusting in their Big Mac, but if you are mean to the counter guy at McDonalds, you pretty much deserve what you get.

This video is easily one of the wildest I have seen in some time. So many mistakes made here. The white girl customer, though it’s not clear why, made her fatal mistake when she threw something at the counter girl. Counter girl just straight wasn’t having it. Not today, Brittney, not today. The ensuing fight went about like you’d expect when females are involved. A handful of hair and fists of fury. That is until Brittney’s man decided to intervene, and he got a knuckle sandwich for his trouble. I don’t think the knuckle sandwich is on Popeye’s menu. Maybe it’s seasonal like the McRib. The carnage is almost complete and the brave hero in the white t shirt is attempting to rescue his lady when a couple more body blows land before cooler heads intervene.

Popeye’s is allegedly investigating the location but considering the video that should be a fairly short investigation. That Popeye’s is probably going to be short some counter staff for a while, and Brittney is likely going to have to go to Church’s or KFC for her spicy fried chicken fix.