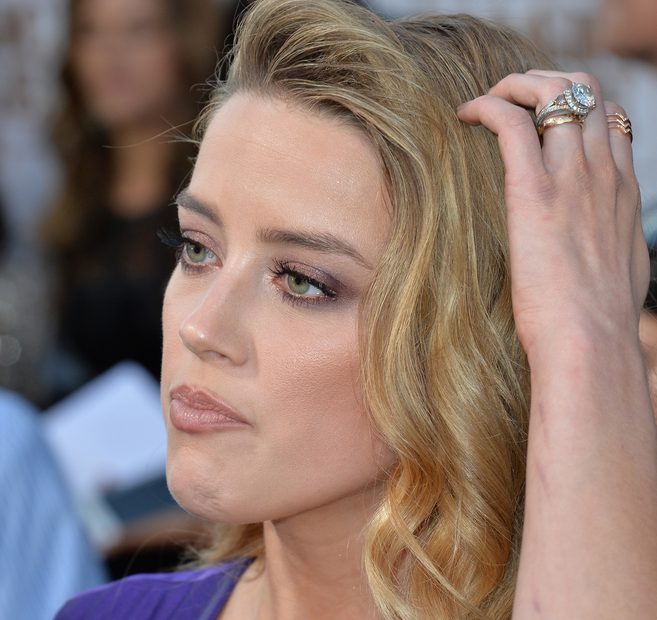 Amber Heard has broken her silence since her embarrassing loss in Johnny Depp’s defamation case against her to have a great big moan about how “unfair” it all was.

In a pre-recorded interview with the Today Show which aired this morning, the 36-year-old Aquaman star said she felt the verdict, which saw her ex-husband Depp, 59, walk out of the courtroom with Heard owing him a grand total of $8.35 million, was biased and largely based around Depp having a very vocal fanbase on social media.

The actress, who during the course of the trial admitted to defecating on Depp’s bed as a “joke”, flew to New York on a private jet to give the sit-down interview with Savannah Guthrie.

Heard, going through her usual routine of animated facial expressions, pouted and frowned as she accused the jury of having been taken in by Depp’s “excellent acting” in the courtroom and said that they were swayed by public opinion, which makes a change to MeToo’s exclusivity when it comes to trial by media:

“Even somebody who is sure I’m deserving of all this hate and vitriol, even if you think that I’m lying, you still couldn’t look me in the eye that you think on social media there’s been a fair representation,” said Heard, apparently confusing Twitter trends with the court.

In a case that lasted 6 weeks, Heard’s ex-husband Depp successfully sued her for damages after she published an article in the Washington Post accusing the actor of physically abusing her.

Perhaps expecting a MeToo-style witch hunt against Depp, Heard ended up ruining her own reputation, alienating herself from the public and celebrities alike and ultimately being told to pay Depp $10 million. Heard was awarded $2 million in compensatory damages.

Although the jury was played a voice clip by Depp’s team in which an agitated Heard belittles the actor for running away after she’d physically assaulted him, yelling “I did not punch you, I was hitting you” and then goading “tell them, I, Johnny Depp, I’m a victim of domestic abuse … and see how many people believe or side with you,” Heard said the jury was swayed by “paid employees” and “randos”.

“They had sat in those seats and heard over three weeks of nonstop, relentless testimony from paid employees and towards the end of the trial, randos, as I say.

She went on to say that she couldn’t understand why the jury found her allegations unbelievable.

‘”Again, how could they after listening to three and a half weeks of testimony about how I was an uncredible person and not to believe a word that came out of my mouth.”

Well, I suppose the days when a woman could accuse a man of anything at all and then sit back and watch the fireworks are finally over. Not a day too soon either.