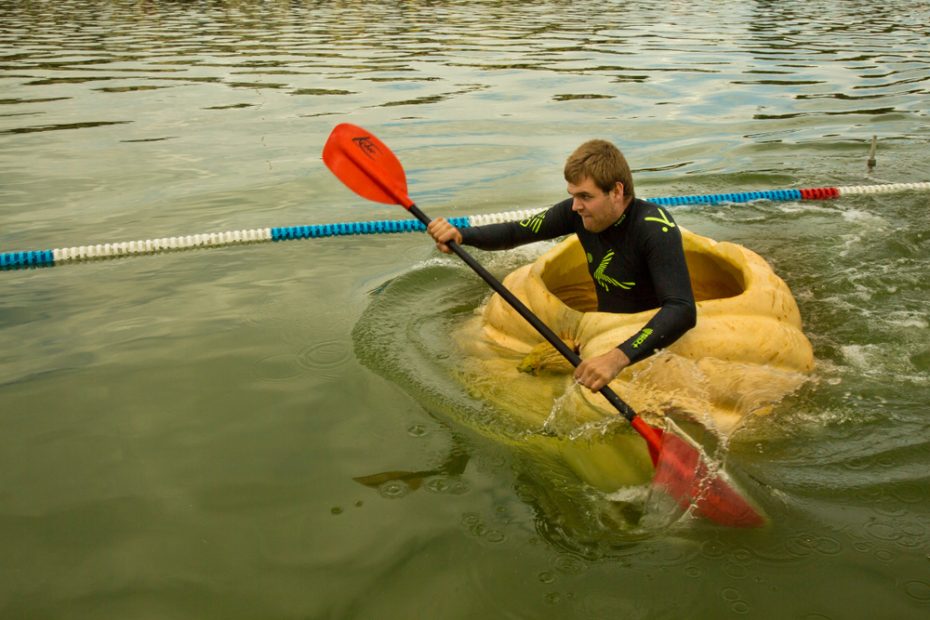 On the morning of his 60th birthday, a guy from Nebraska got up with a single aim in mind to raft down the mighty Missouri river in a gigantic pumpkin. Pumpkin enthusiast Duane Hansen broke the Guinness World Record for the longest journey in a pumpkin boat. Hansen made it 41 miles down the Missouri River in an 846-pound pumpkin that he named the SS Bertha.

Hansen set off from Bellevue in the pumpkin boat he had built himself and paddled for a total of 12 hours before breaking the previous world record of 25 kilometers, which had been achieved in 2016. Hansen arrived at Nebraska City at the 41st mile-marker of the huge river to find a mob waiting for him with “tears, shouts, and swollen knees.”

The Good News Network had more details to share about the incredible feat:

“When we first got started it went real quick, like the first five miles felt like nothing,” said Yvone Hansen, Duane’s sister who arrived from San Diego to do the paperwork for the official Guinness World Record attempt. “Once we got about 18 miles in, it started feeling like ‘wow, this is a long trip.’”

Dangers included sand bars, the wake from passing boats, and rocky shallows. In the water, the pumpkin’s spherical shape meant that any direction Hansen moved, so too would the pumpkin. It was an exercise in balance and discipline, and even waving to onlookers was risky.

“You’ve got to be on top of it the whole time—the whole time,” Hansen told local news. “The boats leave the waves and you’ve got to stop everything and just hold on and ride with those waves. That was bad.”

At a huge pumpkin growing seminar in Portland, Oregon, Hansen happened to meet the former record holder for the world record. Ever since that meeting, Hansen has been successful in producing pumpkins that weigh between 200 and 400 pounds. One pumpkin in particular which he named big Bertha was starting to get massive which then gave Hansen the idea that he could use the pumpkin as a boat. Big Bertha was growing at a rate of 14 pounds per day and when it was finally done growing Hansen pulled it from the vine and started his new project of gaming Big Bertha into a boat.

Check out Hansen giving an interview here with WGN 9 News:

First Hansen lifted Bertha into a cement pond with the help of a Bobcat so that he could determine her float point, he then started cutting the cabin into her 146-inch circle with chainsaws, and after getting some paddles his boat was finished. Hansen isn’t the first person to put pumpkin boat riding on the map,  the bizarre activity has been going on for decades. In Tualatin, Oregon a pumpkin boat race happens every year where hundreds of people gather to see who has the fastest pumpkin.