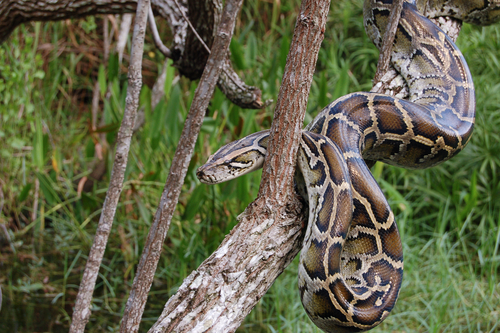 A gigantic snake that had two dogs living within its guts was captured in the northeastern part of Thailand.

The python, which measured 22 feet in length had a big stomach bump when it was discovered, and it’s believed that the large python has been snacking on local pets for the last several years. The huge snake was discovered on July 9, when a large python was seen slithering across abandoned building materials at an empty lot in the province of Sisaket.

Animal rescue agents were called to attend to the python and were seen on video footage coaxing the animal out of the nest it had created for itself below a stack of old concrete posts.

MSN reported that one of the agents Piyachat Charoensopha provided the following explanation: “It was one of the largest snakes we have seen up to this point.”

Take a look at the snake here:

It’s possible that the python spent some time in the wasteland and fed on the stray animals that were there.

Piyachat also mentioned that a resident of the hamlet was hunting for their two lost pet dogs, which are most likely the animals that are currently in the snake’s stomach. Since there were two dogs found within the snake, it’s fair to say that the python was responsible for the disappearance of the pets.

Thailand is home to a diverse collection of python species, one of which is the reticulated python, which holds the record for being the longest snake in the world. In the year 2021, a farmer in the province of Chon Buri came found another enormous python that measured 20 feet in length and required the assistance of eight people to remove from fields.

Pythons are not just eating dogs in Thailand, but they are becoming pests in Florida too. To combat the overpopulation of Burmese pythons Florida wildlife officials have created the Florida Python Challenge.

The Florida Python Challenge, also known as the Florida Python Bowl, contributes to the preservation of the natural habitat of the Everglades and the creatures that call it home by removing non-native and invasive snake species. The Glades’ food chain is thrown off by the presence of Burmese pythons, who are apex predators.

The Florida Python Challenge is a competition that lasts for ten days and takes place in the levees and wetlands of the southern Everglades. The goal of the competition is to catch as many pythons as possible. Professional and amateur snake hunters compete in the event.

More than 650 people signed up to take part in the event in the year 2020, and as many as 18 snakes were brought to the check stations operated by the Florida Fish and Wildlife Conservation Commission.

During the event in 2021, participants were successful in removing 223 invasive Burmese pythons. Charles Dachton, a retired police officer, was able to catch 41 snakes, making him the winner. The grand prize of $10,000 was won by Dachton.

Does hunting pythons in the swampy everglades sound fun to you? If so you should check out highlights from last year’s Python bowl: