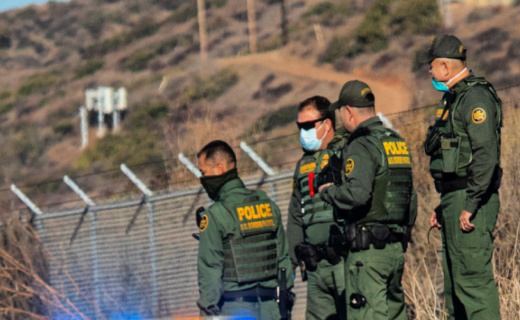 Border Patrol agents have kept Americans safe once again after they arrested two illegal aliens, at the southern border, who were previously convicted of sex crimes and deported. The criminals tried breaking back into America as part of a larger group of migrants, but Border Agents got them both within 24 hours.

CBP posted this memo for all to read:

May 24, around 9:30 a.m., Eagle Pass Station agents apprehended a group of 13 subjects. They were transported to the Eagle Pass South Border Patrol Station for processing. Record checks revealed that a Mexican national, Salvador Montecillo-Rufino, 57, was convicted of sexual assault in Washington in 1998 and sentenced to 17 months in prison.

May 25, just before 8 a.m., agents from the Eagle Pass South Station encountered a group of 12 migrants near Eagle Pass. During processing, record checks revealed, Wilfredo Pineda, 31, a Salvadoran national, was previously convicted of statutory rape in 2012, in South Dakota and sentenced to a year in prison.

Both migrants have been previously deported.  As convicted felons, they face charges of 8 USC § 1326 – Re-entry after Deportation, which carries a maximum sentence of up to 20 years in prison.

All subjects are processed in accordance with U.S. Customs and Border Protection policies.

U.S. Customs and Border Protection is the unified border agency within the Department of Homeland Security charged with the management, control and protection of our nation’s borders at and between official ports of entry. CBP is charged with securing the borders of the United States while enforcing hundreds of laws and facilitating lawful trade and travel.

President Joe Biden and his administration recently tried to appeal a Trump-era Title 42 policy, but was rejected by a federal judge in May.

On Friday, May 20, Judge Robert R. Summerhays of the U.S. District Court for the Western District of Louisiana issued a preliminary injunction blocking the Biden administration’s attempt to end CDC orders issued under Title 42 of the U.S. Code in response to the Covid-19 pandemic, which have directed the expulsion of illegal migrants since late March 2020. Unsurprisingly, the White House disagrees with the injunction (and DOJ has vowed to appeal it), but the president will comply with the court’s order.

Title 42. As noted, CDC issued its first Title 42 order shortly after the pandemic was declared in late March 2020. It is a public-health and not a “border” policy per se, but of the nearly 518,500 aliens encountered at the Southwest border by DHS under the Trump administration between April 2020 and January 2021, nearly 459,600 (88.6 percent) were expelled under Title 42.

That changed, however, after Biden took office. The new administration exempted unaccompanied alien children (UACs) from the scope of Title 42 — an exception that was itself briefly enjoined before CDC issued a new order expressly excepting UACs. In addition, Mexico increasingly refused to accept the return of expelled alien migrants travelling with children in “family units”, and Biden never tried to force them to do so.

Former President Donald Trump put Title 42 in place to help slow the spread of illness, but Democrats often criticized Trump by saying it was racist – despite the potential benefit of reducing the amount of people entering the country during trying times in the hopes of keeping people safe until things cleared up and a solution was found.