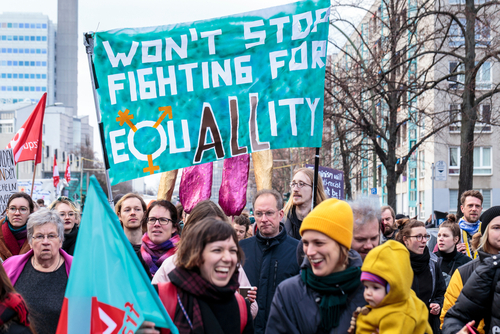 The concept of feminism which has had its grip on women in society for decades seems to be losing its approval as women are now realizing the beauty in their femininity.

Feminism’s primary goal was defeating femininity which is the essence of womanhood. Feminists have argued for years that their fight is for women’s rights and gender equality. However, they have successfully fought against women just being women as it tried to make them be more like men. They have fought against the essence of womanhood itself as they described it as just societal stereotypes and the likes.

It replaced the things women needed to make themselves whole with superficial nonsense that they touted as “freedom” and “liberation” but devalued them in reality. Feminists have argued that everyone should be feminists because females have been mistreated for centuries, unlike males. However, in their fight for this fairness, they seem to have lost their steps as they have begun to fight for the total elimination of gender roles in society as they claim that the gender roles attached to women were influenced by patriarchy.

This has made several people afraid to admit that they are satisfied with their femininity and don’t want to compete with their male counterparts. Feminism has made this set of people feel like being happy with their state is the same as tolerating the bare minimum, and they should be ashamed of that.

What feminism has done so far is confuse women worldwide, making women question the principles they have lived with and were raised in by their foremothers, the media, and society at large. It has also caused unhealthy competition as women are now compelled to believe that whatever they have been doing is not enough and feel a strong desire to outperform their male counterparts in every way possible.

People who are tired of being told that their womanhood is mediocre and have had enough of the general feminism preachings have started coming out to fight for their femininity.

A girl on TikTok had recently addressed this issue as she pointed out that feminism wasn’t actually about women’s liberation at its core. Instead, it was about sending women into the workplace where the state could make more money off of them, forcing their children to go to state-funded schools to be taught state-approved curricula.

She also pointed out how feminists had planted the idea that women serving as workhorses for corporations would bring them true freedom. However, this has only caused them to lose touch with themselves and brought more distance between men and women.

Many women seem to agree, as comments about how feminism has ruined everything can be frequently seen on social media. Women have bashed feminism, which is why they were suddenly forced to remove their concentration from raising their children to competing for bigger paychecks in workplaces.

Feminism still has a massive hold on several women, but this hold is gradually breaking as more people begin to fall in love with their femininity and are no longer ashamed to admit it.