Tesla Building Terminators? Plan To Have “Useful Humanoid Robots” in the Works From Elon Musk 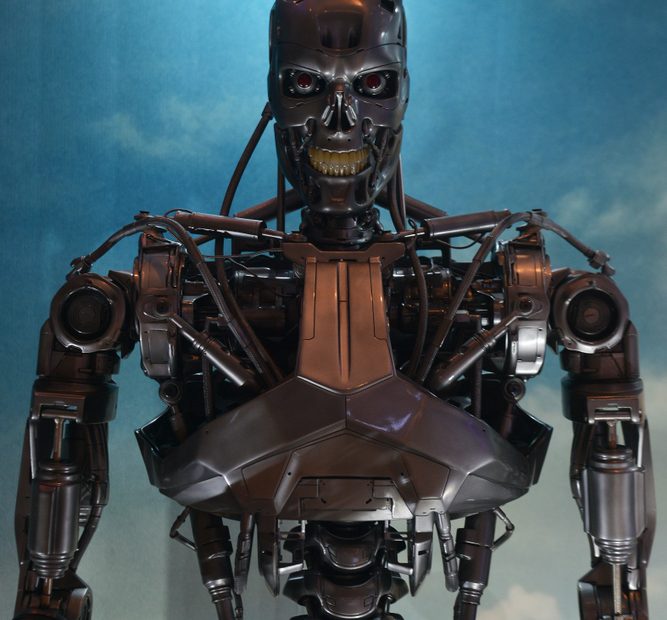 Are we ever going to learn? That’s not a rhetorical question, rather a serious one. When is man going to stop playing in God’s back yard? We are cloning things, attempting to create meat from cells, creating babies in test tubes; stuff like this comes with consequences! We may not know what they are yet, but you can bet it won’t be good.

Science loves nothing more than to monkey around with forces it might not be able to control. We just crashed a spaceship into an asteroid as a test to see if we can avoid a collision someday. It worked, but what if it didn’t? What then? Scientists are injecting human DNA into monkeys, and the monkey’s brains are growing so fast that their skulls can’t grow quickly enough to catch up. Do we really need super smart monkeys with monkey strength? Has no one seen “Planet of the Apes”? I mean, come on, we know how that ends! Anyone remember the Large Hadron Collider? We shot lasers and collided them faster than the speed of light. Never mind those scientists admitted there was a small chance of creating a singularity and destroying the Earth with a black hole. Let’s go for it anyway!

Last week at Tesla’a AI Day event, Elon Musk unveiled a terrifying new creation that will probably attempt to enslave humans and eradicate us from the Earth. Sound like Terminator? Check this out:

Tesla Shocked the World ~10 Hours Ago When They Revealed Their Optimus Robot!

Someone should have stopped Musk right there and immediately destroyed the robot, perhaps even lowering it into molten steel like in “Terminator 2” so no one could copy the design later.

Why do we need humanoid robots? Are we that lazy that we can’t do our own simple tasks? What’s Musks next invention, a plasma gun? Let’s chill with the AI Elon, we barely have any real intelligence, we don’t need robots smarter than us!

The version of Opitimus that was unveiled at Tesla’s AI Day event is only a prototype, but Tesla believes that a version of it will be available to consumers in the near future. Musk predicted that in the next few years, Tesla would be able to produce millions of robots and sell them for under $20,000. “Right now we just want to make basic humanoid work well, and our goal is fastest path to a useful humanoid robot,”

Great! Why not just call it the T-1000 and get it over with. Maybe Musk can rebrand Tesla like Facebook did. Perhaps Cyberdyne Systems? I think that name isn’t being used. Yet.

It’s unsettling that any idiot with a 650-credit score might be able to buy a fully functional, mass-produced humanoid robot in the next few years. You know those robots will probably be able to communicate over Musks Starlink internet service. How long before they get together and realize humanity is mostly a bunch of mouth breathing idiots bent on self-destruction, and decide to go ahead and eliminate us? I’d give it 18 months.

Musk differentiated Optimus from existing humanoid robots by stating that competitors’ robots are “missing a brain,” along with the ability to solve problems on their own.

It sounds like Musk just described half of the people that will probably own these robots. How long before they collectively get tired of our crap? And don’t think a “Terminator” scenario is just science fiction. Musk admitted it.

Musk has warned in the past about the potential pitfalls of artificial intelligence. He stated his concern that a future with AI could look something the “Terminator” series, with supercomputers serving as “an immortal dictator from which we would never escape.”