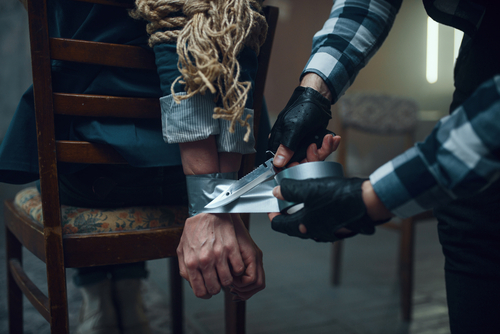 Kidnapper who “violently snatched” billionaire heiress, as she was previously released from prison for another abduction in 2020.

Cleotha Abston, 38, was charged with especially aggravated kidnapping and tampering with evidence after he grabbed Eliza Fletcher, 34, and bundled her into an SUV.

Fletcher, who works as a kindergarten teacher, had been jogging past the University of Memphis in Tennessee on her usual morning run on Friday when security cameras captured a black vehicle driving past her.

A man came running out of the vehicle and aggressively attempted to restrain the struggling woman. He managed to force her into the passenger’s door and the car remained stationary for around 4 minutes before it drove off.

“The investigation into the abduction of Eliza Fletcher is still active and ongoing. Investigators are continuing the search and following all leads,” said cops in a statement on Sunday.

A manhunt ensued to find Fletcher and her abductor over the weekend. Cops were alerted to her whereabouts when a black SUV with a broken taillight, matching the one in the CCTV footage, was seen parked outside Abston’s home.

One neighbor said she had spotted Abson behaving “oddly” later that day and said she saw him desperately trying to clean the interior of the car with carpet cleaner and washing his clothes in the kitchen sink.

This is not the first abduction in the felon’s repertoire. In 2000 he was given a 20-year prison sentence for kidnapping Memphis attorney, Kemper Durand.

At 2 am on May 25, 2000, Abston grabbed Durand from behind, robbed him, and then forced him into the trunk of his car.

The depraved criminal then drove around for several hours before forcing Durand to withdraw money from an ATM. It was then that Durand screamed at a housing authority officer for help, prompting Abston to flee the scene.

After serving 20 years for the kidnap, he was released from prison in July 2020, just two years before going on to commit another heinous abduction.

In the struggle to abduct Fletcher, Abston had lost his sandals which were recovered by cops at the scene and matched to his DNA. The depraved criminal has not yet revealed the whereabouts of Fletcher or whether or not the teacher is still alive.

Police were seen rooting through a dumpster outside a nearby McDonald’s over the weekend, and homes in the surrounding area were searched as cops desperately try to find the missing mom.

Fletcher’s family who owns Orgill hardware company have issued a $50,000 reward for any information relating to her whereabouts or those involved in her disappearance.

“We look forward to Eliza’s safe return and hope that this award will help police capture those who committed this crime,” said the family in a statement.

Abson is being held on a $500,000 bond at the Shelby County Jail and will make his first court appearance on Tuesday. His brother, Mario Abston was also arrested for possession and intent to manufacture fentanyl and heroin, and the possession of a firearm during the  Commission of a dangerous felony.