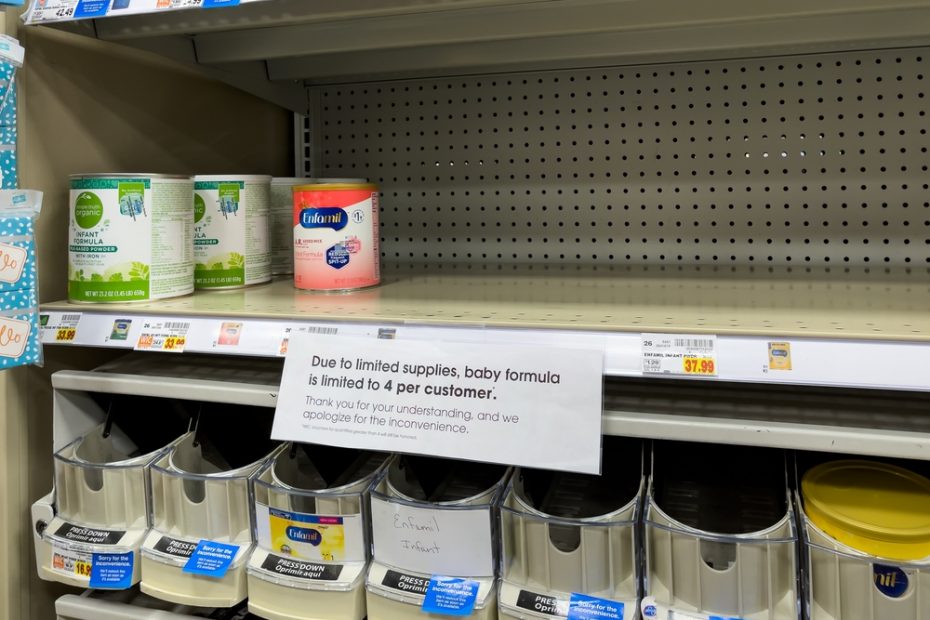 Only two weeks after Abbott’s factory in Michigan began the production of baby formula after months of a national shortage, flooding has forced the suspension of production.

The large production facility in Sturgis, Michigan, is the largest baby formula producer in the US, producing major brands like EleCare and Similac. However, replenishing the barren stock numbers will now see another setback as the plant has completely closed due to severe flooding caused by a storm.

Parents have scrambled to snatch baby formula from store shelves over the past few months as supplies became increasingly scarce during the Covid-19 pandemic due to severe labor shortages and supply chain issues. According to Bloomberg, 74% of the formula was out of stock at the end of May.

The shortage has been so severe that retailers had to impose buying limits in April due to “supplier challenges and increased customer demand,” said CVS.

The city of Sturgis, where the factory is located, was hit by torrential thunderstorms last night, causing blackouts for many homes and flooding throughout the area. Abbott’s is so damaged that company spokesmen say the production of the formula may not restart for several weeks:

“Abbott has ample existing supply of EleCare and most of its specialty and metabolic formulas to meet needs for these products until new product is available,” said the company in a statement.

“Once the plant is re-sanitized and production resumes, we will again begin EleCare production, followed by specialty and metabolic formulas. In parallel, we will work to restart Similac production at the plant as soon as possible,” it continued.

The latest blow to supplies comes just a few weeks after Abbott had to recall numerous brands of its formula due to contamination which left two babies sick and one dead.

Dr. Robert M. Califf, US Food and Drug Administration Commissioner, Tweeted that there is a “shared desire to get the facility up and running again as quickly as possible” and assured consumers that the “unfortunate setback” won’t see parents having to go without:

“Abbott has been exceeding the monthly quantity of formula that it produced in 2021 – all while the Sturgis facility is out of production. Other producers also continue to make formula at higher-than-average rates, and we continue to exercise flexibility to import add’l formula.

“This means that the total amount of formula available, even before the Sturgis plant is back in production, exceeds the demand for formula prior to the recall,” he added.

Three days ago, before the storm struck, Abbott wrote on its website that it planned to ship 1.1 million pounds of powdered infant formula to the US from a sister facility in Spain.

It is unclear if the company can rely on this supply chain while its US facility is re-established.

Abbott is one of four companies that produce around 90 percent of baby formula in the US, along with Gerber and Perrigo Reckitt.