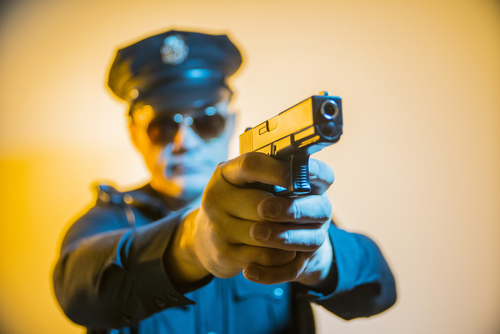 On Thursday, an unfortunate incident occurred in Washington DC when a retired cop shot and immediately killed another officer. This incident happened during a training session inside a city library.

The Police Department Chief Robert Contee had announced at a press meet that it happened in the city’s Anacostia Library. Following this event, the 58-year-old retired Lieutenant Jesse Porter, who shot another cop while training, was arrested and charged with involuntary manslaughter as all the witnesses had recognized that it was an honest mistake.

The deceased cop, in this case, was identified as the 25-year-old Maurica Manyan of Indian Head, Maryland. Before her unfortunate death, she served as a public library special police officer for a year. Later that day, the library officer was pronounced dead at the hospital she was rushed to, and her grieving family had refused to speak to the press about their loss.

Breaking: Police say they have charged retired D.C. Police Lt. Jesse Porter with involuntary manslaughter in the shooting death of a library police officer at a training session. Officer who died identified as Maurica Manyan, 25, of Maryland.https://t.co/Tefu9VigCL

The Metropolitan Police Department and the State Attorney’s Office for the District of Columbia commenced investigations to discover how this incident played out. More so, the police officers present at the scene and Jesse Porter himself had immediately been questioned by the police department.

Officers commented that they were making a joke about Maurica’s hair and even wanted a picture with her after the training. As she tried to remove her mask, the Lieutenant immediately pulled out his gun.

The officers were being trained on quick reactions, and the retired Lieutenant, the trainer in this situation, was demonstrating how they could quickly use their handguns. He had, however, fired a shot that struck Maurica in her chest, causing her to lose her life immediately.

Contee mentioned at the conference that he had no clue why the Lieutenant had fired his gun or answers to why bullets were even in the gun. “There are props and firearm lookalikes that are in a training environment. They were present in this environment. But why and what kind of thoughts was in his mind at this time, I don’t know the answer to that. I don’t have answers as to why the live firearm was in ASP baton training.”

Contee had, however, recognized that the retired Lieutenant was permitted to carry a loaded gun as he was a certified special officer.

Jesse Porter had admitted that though he had intentionally fired as he wanted to demonstrate, he had no idea there was an actual bullet in his gun.

“I thought I had my training gun. Why did I do this? Is she ok?” Porter had asked immediately, he realized what had happened. As he was apprehended, he reportedly showed remorse and apologized to the other officers and said he was sorry for shooting their colleague. The Lieutenant made a first appearance at the Court on Friday and was released on his recognizance.