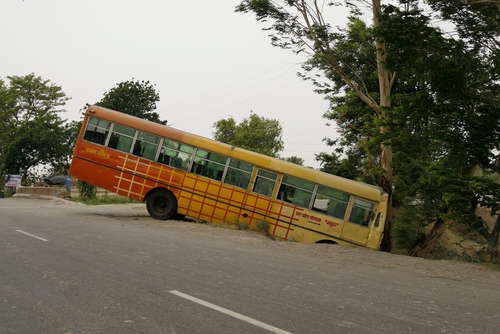 After driving a school bus full of kids into a ditch on Friday while under the influence of alcohol, a bus driver in Georgia is facing accusations of drunk driving as well as dozens of more offenses, according to local authorities.

Only in Georgia: Pickens County School Board has not made a decision about the employment status of the bus driver who is facing 42 charges, including DUI, after crashing into a ditch while taking kids home. (Seriously, Pickens County?) https://t.co/NZWGK1leL4

WSB-TV was informed by witnesses that they thought there were forty youngsters on board the vehicle at the time of the collision. According to Fox 5 Atlanta, the Pickens County Schools and investigators assert that there were no injuries, despite the fact that multiple parents have come out stating that their children had ailments ranging from concussions to psychological trauma.

One of the mothers who had children on board told the publication that both of her daughters were weeping when they finally arrived home. “One of them woke up this morning and said that she is still disturbed.”

Others have stated that their youngsters are too terrified to ride the bus ever again. “I don’t trust Pickens County to make sure the bus drivers are safe to be with,” said Chelsea Medley, whose first grader was on the bus shortly before the collision. “My son is probably going to be doing after-school sic,” she added. “The bus is barely on two wheels, and had it been anyplace else on this mountain, they would have tumbled over and wounded each and every one of those kids,” the mother said. “But luckily for them, they were not there.“

According to a mother who spoke with Fox 5 Atlanta, one of the children who was on board reported to her mother that the driver smelled strongly of alcohol, which led to the discovery of Tucker. She explained, “We phoned 911 and claimed that he smelt like alcohol, and they said they would go back and breathalyze him.”

Parents have been reassured by the Pickens County School District that the matter is being handled with the utmost care; however, the district has not commented on whether or not Tucker will be dismissed as a result of the event.

“This is a subject that is taken very seriously by the District, and the safety of our students is our top priority and uttermost concern. Once the investigation that is being conducted by law enforcement has been finished, we will launch our own inquiry to investigate the facts and circumstances surrounding this heinous occurrence,” Young said.