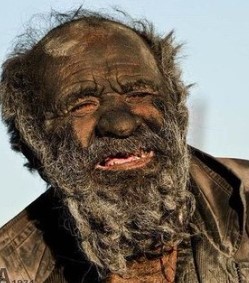 Regular bathing is a relatively new habit. For centuries it was uncommon and nearly impossible for people to bathe regularly. Certainly, it was a smelly, dirty, germ filled world. It’s no wonder average life expectance was about half of what it is now. It also begs the question; how did people procreate? The smells involved had to be overwhelming. That aside, we are now all living longer, and we certainly smell fresher than ever before! Most of us anyway. I’m sure Joe Biden smells like Band-Aids and mustard.

Recently tragic news broke about the worlds reported “dirtiest” man. From all accounts there is no disputing his title. My assumption is most people in the Middle East are at least a little dusty by virtue of their climate, but “Uncle Haji” took the business of being nasty to the next level. Check this out.

“Uncle Haji,” known by international media as the “world’s dirtiest man” due to the fact he didn’t bath for over 60 years, died at the age of 94, after falling ill shortly after his first bath, Iranian media reported on Tuesday.

Well damn. Haji managed to avoid the Grim Reaper for 94 years, 60 or more without a bath because he thought it would kill him and turns out he was also the worlds smartest man. What did they bath him with, rocks? Maybe they should have wrapped him in a nice terry cloth bath robe instead of just hosing him off and turning him loose wet.

Haji, a resident of Dezh Gah in the southern Fars province of Iran, avoided eating any fresh food and believed that he would get sick if he took a bath and that being clean harmed your health.

Haji ate roadkill and smoked a pipe full of animal excrement. Local doctors said that he appeared to be healthy, despite his lack of hygiene.

According to the Iranian Tasnim News Agency, Haji would regularly trim his bead by burning it while using a car mirror to see himself. He would sleep in a “grave-like hole” and during the winter he would live in a simple four-walled shack that the villagers built for him.

There are no words that can paint a better picture than those. The man lived in a grave-like hole! I guess they just took him home after he passed. Too soon?

So many questions. Did Haji cook the roadkill? Was the poop he was smoking harvested from the aforementioned roadkill. Am I ever going to have an appetite again? I am assuming from my “first world” perspective that local doctors perhaps aren’t the most eminently qualified in terms of diagnosing a healthy lifestyle, but Haji was living proof that he was apparently doing something right.

Local residents respected him and his decision to avoid cleanliness, but a few years ago a group of youth tried to bring him in a car to the river to bath. When he realized that they wanted him to bathe, he jumped out of the car and ran away.

Finally, a few months ago, the villagers convinced him to take a bath. He fell ill shortly afterwards and died on Sunday.

I assume they told Haji they were going to “the park” until he realized they were going down to the old watering hole to scrub stinky down before he bounced. I’m certain the trade-in value of that vehicle took a “nose” dive after that aborted trip to the showers.

It’s a sad ending to a smelly story. Ultimately Haji knew what he was doing, but the busy bodies in his village just wouldn’t leave smell-enough-alone. RIP Haji let’s hope you are stinking up whatever afterlife your culture subscribes to in peace.