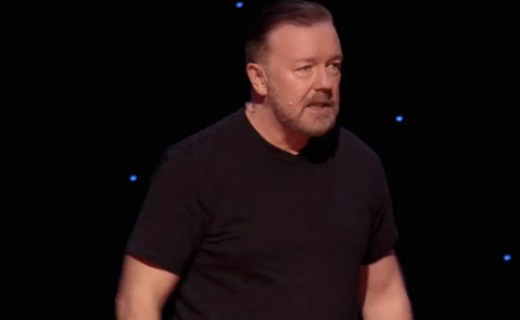 Ricky Gervais is setting the Internet on fire with several jokes that some claimed to be anti-transgender during his new Netflix special called SuperNature. The jokes caused a massive amount of people to laugh as Ricky Gervais pointed out the absurdity of it all in just a few quick jokes. Some people in the LGBT crowd claimed they might cancel their subscription, but it seems like Netflix doesn’t really care and would find more subscribers due to the millions of people likely to laugh at the jokes.

What did Gervais say: “I love the new women… They’re great, aren’t they? The new ones we’ve been seeing lately. The ones with beards and c – – ks. They’re as good as gold, I love them…

“And now the old-fashioned ones say, ‘Oh, they want to use our toilets.’ ‘Why shouldn’t they use your toilets?’ ‘For ladies!’

“What if she rapes you, you f – – king TERF w – – re?” quipped Gervais, referencing the acronym for Trans-Exclusionary Radical Feminist, which is used to refer to people who reject the idea that trans women are real women.”

“You won’t find a ten-year-old tweet saying ‘Women don’t have penises.’ You know why? We didn’t think we f – – king had to!”