Progressive State Poised to Become The Abortion Destination of America 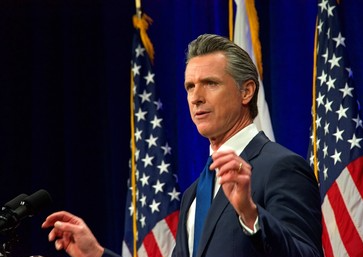 Destinations in this country used to be based on seeing family and friends or exploring all the beauty our country had to offer in places like Colorado, Wyoming, and even California. Well, destination America has turned toward the macabre and evil. California is proud to announce that they plan to be the number one abortion destination in America, and no, this isn’t a nightmare. This is reality, and it is almost too horrible to believe. The snake of a governor even dared to quote scripture to push his abortion agenda in the state of California.

This makes me sick. Gavin Newsom quoting Scripture ("Love your neighbor as yourself" – Mark 12:31) in his billboard going up in Oklahoma today advertising California as an abortion tourism destination. Simply no words for how twisted this is. https://t.co/Z2d8yOZRCL

California recently passed a slew of laws offering abortion protections to residents and abortion tourists, successfully positioning itself as an abortion sanctuary state for those seeking to have an abortion nationwide. However, according to a pro-life attorney, the true motive behind the legislation has other motives than simply being the abortion savior of the United States.

“It’s horrific what the California Legislature has done,” said Susan Swift, vice president of legal affairs for the Right to Life League. “What they are doing … it’s like, Detroit used to be known for producing cars, right? Well, California is building an abortion industry. They are funding it actively.” Founded in 1967, the Right to Life League provides ongoing support to a network of pro-life clinics, pregnancy centers, and maternity homes in the United States. Clinics that, in recent times, have been called “domestic terrorists” for their right-to-life ideologies.

Another aspect of the Right to Life League’s mission is to lobby against pro-abortion legislation. One recently passed bill, SB1142, Swift described as California’s “master plan” for becoming the nation’s hub for abortion tourism. Remember, abortion is big business.

SB1142 will fund travel to the state, lodgings in the state, lost wages, and even fund childcare for anyone that wants to bring along the children they didn’t murder while they get a free abortion, courtesy of Gavin Newsom.

The idea of abortion tourism is not a new concept. Following the Supreme Court’s 1973 decision in Roe Vs. Wade, the number of women who traveled for abortion decreased. However, in recent years, abortion travel has been on the uptick as certain states began to tighten their restrictions in anticipation of a possible reversal of the landmark ruling. Then it happened.

Roe vs Wade lost legitimacy when the democrats lied about the gang rape of Jane Roe to make their case more dramatic. pic.twitter.com/hWRYtSeTFz

According to Swift, several abortion companies came together and figured out a way to centralize their sick business model in California, and that is when SB1142 created a one-stop-shop website that lists all the abortion providers. The bill is still yet to be signed by Newsom, but the website is already up and running. On September 13, 2022, Newsom announced the website launch on Twitter, bragging that it was a nationwide resource for all your abortion needs.

But there can be legal ramifications and legal challenges for Newsom if the website solely promotes abortion services without offering pre-natal services for those who to wish actually to give birth to their child. Currently, the website excludes any information on pro-life and pregnancy centers. The state’s unwise decision to favor abortion over pro-life facilities violates the state of California’s constitution.

I look forward to their abortion tourism plan falling apart.

Is Gavin Newsom a Christian nationalist for quoting, on billboards, Mark 12:31 in promotion of abortion?@BillyHallowell explains:https://t.co/DfkOhiDAaq

I’ve got a quote from 1 Timothy 4:1 for Mr. Newsom: “Now the Spirit expressly says that in later times some will depart from the faith by devoting themselves to deceitful spirits and teachings of demons…”