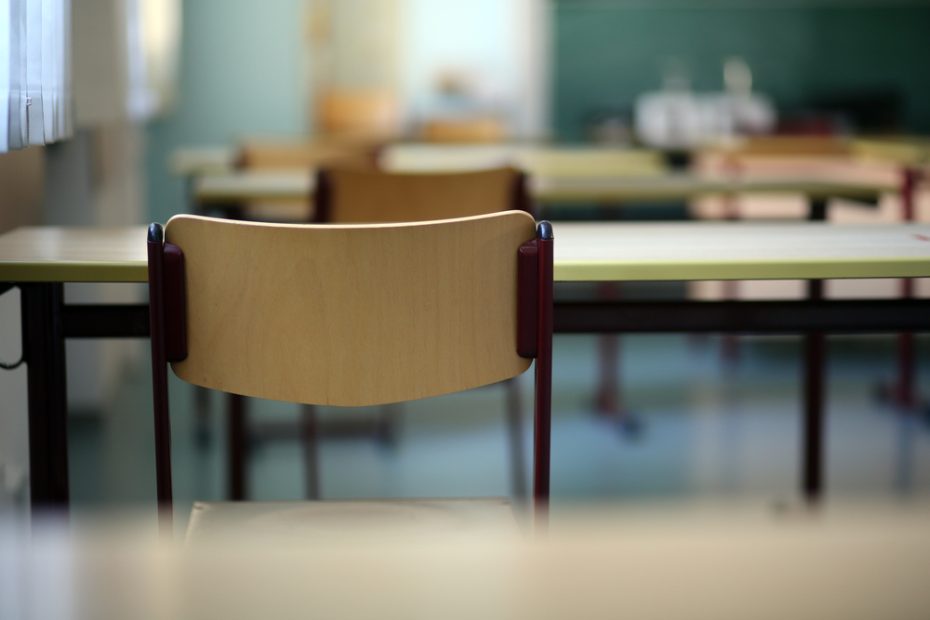 In the latest gross assault against children’s education and well-being in schools, the director of the City University of New York’s program that teaches college courses to kids from poor backgrounds has denied posing for a photo in a classroom without any pants on.

Michael Steele, 52, who runs the CUNY Early College Initiative posted a photograph of a man in a classroom wearing a Covid facemask, an orange polo shirt and black sneakers but no pants.

A black pair of underwear briefs can be seen under his shirt.

Seemingly taking the stunt as some kind of perverted joke, Steele captioned the image:

“When it’s hot inside and outside. It’s Pom Pom shorts time. No kids were present for this blackmail photo”.

After the press began to pick up on Steele’s disgraceful post, he bizarrely claimed that the man in the image was not him but would not disclose the identity of the mystery man.

Coincidentally, the man in the photo has a tattoo on his left arm, just above the shirtsleeve which looks very similar to ink that Steele has in the same place.

Screenshooting this before he deletes the picture. No way a pervert like this should be working with children @CUNY pic.twitter.com/tHHc6sH5m6

The image caused a stir on social media with some users pointing out the ridiculousness of Steele having taken his pants off but continuing to wear a facemask over his mouth.

“NYC … where you don’t have to wear pants to school as long as you’re wearing the damn mask,” posted one user.

Another questioned the integrity and professionalism of a grown man who would strip his clothes off in an environment where there are children:

“There’s such a thing called professionalism. Don’t people know the appropriate behavior for work environments? Especially ones around kids?” Tweeted the user.

Twitter user @TTEcclesBrown sarcastically quipped: “I wish all of the teachers were as comfortable with themselves as this guy. Imagine how free he feels. A great environment for learning!”

Steele has worked as an educator and teacher since 1996, according to his LinkedIn page. He started out as a 9-10th grade teacher at Loyola High School in Detroit. He worked as an adjunct professor at the University of Detroit Mercy and became principal of the Nativity School in Michigan in July 2005.

He has been involved in the CUNY program for nearly ten years and took a director’s role in 2021.

The CUNY program aims to help under-privileged kids from middle and high schools to get access to college-prep courses to help them get into higher education. Students from grades 6 to 12 are accepted for courses, so some of the children on the program could be as young as 11 or 12.

“This post was brought to our attention, subsequently removed and appropriate action is now being taken,’ the university said in a statement. ‘CUNY is committed to providing an appropriate learning environment for all its students,” said CUNY in a statement regarding the inappropriate snap.