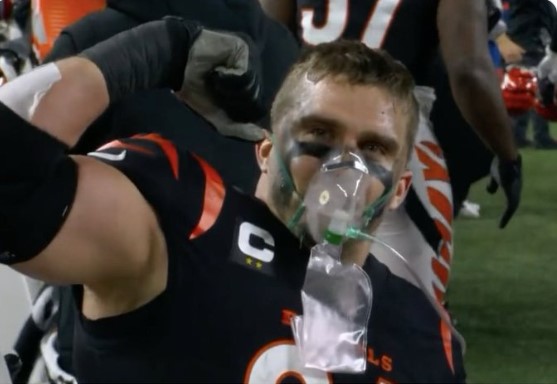 One of the brightest young defensive stars in the NFL is finding his charity bowing up after delivering a game changing fumble return Sunday night during the Wild Card round of the NFL Playoffs. Sam Hubbard, the fifth-year defensive end from Ohio State now a budding star defensive end for the Cincinnati Bengals snagged a fumble forced by running mate and fellow star defender Logan Wilson, and promptly rumbled 98 yards the opposite direction in staking the Bengals to a lead they would never relinquish. It was a momentum stealing, game changing play as the Ravens were about to take the lead late in the game. Now Hubbard, widely considered one of the better guys in the league is finding his charity blowing up as a result. Check this out.

Donations have been pouring into Hubbard’s Foundation since his monumental fumble return, many coming in under 98 denominations to commemorate the 98-yard return.

As of yesterday, the foundation received over $18 thousand in donations from fans and some companies. One Cleveland shirt company is even taking a famous line from Forrest Gump and changing it to honor Hubbard with “Run, Hubbard, Run!” t-shirts. A portion of the proceeds will go to the foundation.

This is one of the most requested tees we’ve ever had… and we’re honored to say this tee is officially supporting the @sh94foundation. A portion of each shirt sold from https://t.co/VJSLmx1rND goes directly to their cause. #WHODEY @Sam_Hubbard_ pic.twitter.com/hWPyrr99NG

While these numbers aren’t close to the numbers generated by Damar Hamlin after his medical incident against these same Bengals, it does show that NFL fans actually have a heart and some compassion. NFL fans are often portrayed as booze swilling, blue collar knuckleheads, but even knuckleheads have a heart and are willing to help a good cause when the time is right. Of course, many are Bengal fans thankful that Hubbard helped rescue a disastrous late game scenario and assure a rematch with the Buffalo Bills.

After the Bengals victory, Hubbard spoke with reporters about his playoff-changing play. “You just gotta rise to the occasion. I’m glad to be that guy that made a play to kind of change the momentum,” the defensive end said..

It also doesn’t hurt that Hubbard is just an all-around nice guy as well and someone that people want to help. He has been nominated for the Walter Payton NFL Man of the Year award twice. The honor is given to a player who is “recognized for his excellence on and off the field,” through their philanthropy and community impact.

Our advisory board members from SugarCreek and Warm Construction are matching the next $20,000 in donations to celebrate Sam’s @NFL playoff record 98-yard touchdown return! 🟠 ⚫️ 🐅 🐯

Hubbard is a native Ohio boy that starred for his in-state team in college at THE Ohio State University and has continued his career representing his hometown team in the Bengals. It isn’t surprising that fans have shown their appreciation in such a positive fashion. It follows the outpouring from football fans to various charities in recent years.

It’s the latest act by NFL fans in the last few years where players are being shown appreciation through donations to their charities. When Buffalo Bills safety Damar Hamlin terrifyingly collapsed on the field a few weeks back, tens of thousands of people donated to his charity to show their support. Donations also went to Dolphins quarterback Tua Tagovailoa’s charity when he suffered a concussion earlier this season.

When former Bengals quarterback Andy Dalton threw a touchdown pass to help beat the Ravens and send the Bills to the playoffs in 2018, Bills fans flooded his foundation with hundreds of thousands of dollars to say thank you.

The Bills and Bengals have a special relationship in terms of fan base interaction. The respect between the two run deep but could be tested as the Bills host the Bengals in the AFC Divisional round this weekend. We will see if the donations stop pouring in after that game. For now however, everyone is winning.