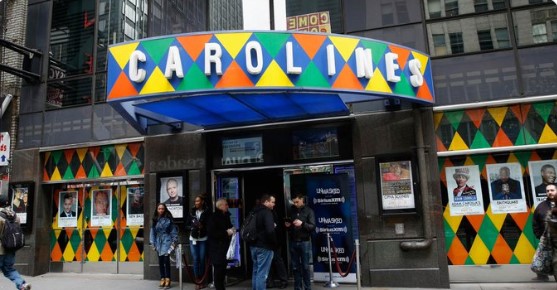 In what is just another sad sign of our times, a New York City icon is closing its doors for good at years end. Caroline’s on Broadway, the famous comedy landmark will be ceasing operations January 1. Carolines has been a staple of the comedy industry and perhaps the most well-known name in America in terms of live comedy, hosting some of the biggest names in comedy, and Joy Behar.

Club ownership could not renew the lease as the building owners seek to get more money in rent from another business. Carolines did manage to send out the very last famous Christmas card. Check this out.

It begins, as it does every year, “May the holidays bring …”

Highlights this year include: “A Taylor Swift song about how Ticketmaster did her wrong,” “An exit strategy for Nick Cannon’s penis,” “Gisele [Bundchen] deflating Tom [Brady’s] balls,” and “Jada [Pinkett Smith’s] husband exercising a little more Will power,” “fewer men having a say about a woman’s right to choose,” and “a good dentist to wire Ye’s mouth shut permanently.”

They also paid tribute to those who were lost this year, with hope for “Bob [Saget] and Gilbert [Gottfried] regaling God with their raunchiest versions of the Aristocrats,” and “Sainthood for Betty White.”

As per usual Caroline’s hilariously lampoons celebrities, political figures and athletes with sarcasm and a touch of truth. Comedy, particularly in person has been on life support for some time now. Many comedians, especially lesser-known ones often water down their material for fear of being cancelled by loony leftists or the LGBTQ air force. It’s disappointing that there will be one less space for the art to take place, considering some of the more daring, groundbreaking comedians performed at Caroline’s. Caroline Hirsch, the owner said this.

“I did not renew my lease. New Year’s Eve will be our last night.” She explained, “My landlord felt they can get a lot more for the space.”

“This is heart-stabbing for me. I love my staff. I love my comedians.”

But it seems she has some ideas for the futures. “I see this as not the end of Carolines, but a new chapter continuing to produce world-class comedy,” Hirsch said.

How and where Hirsch plans to do so remains to be seen. With the attack on Dave Chappelle and audiences in general acting more out-of-pocket when they hear something they don’t like, insurance and security costs have skyrocketed with a need to assure talent that they will be safe on stage. It’s a sad statement for an industry that so many smaller, up and coming comedians rely on to make a living. There are only so many Kevin Harts (thankfully) and Dave Chappelle’s, and these unknown comics need a place to make their name. Sadly, it won’t be Carolines in Times Square, and that’s not funny.