MTG ‘Forgot About Dre’, Gets Her Twitter Suspended Again 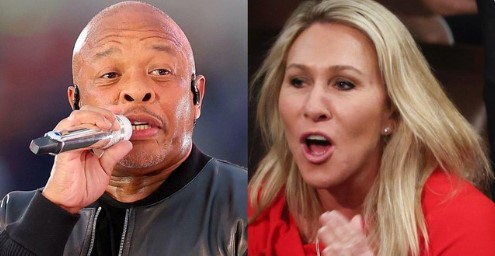 Rep. Marjorie Taylor Greene (R-Ga.) has gotten her Twitter account suspended once again, this time for using some beats from a 90’s rap song by famed rapper, gangster and woman beater Dr. Dre. Dre played the Super Bowl halftime show as recently as 2022 despite his long history of violence towards women, drugs, drunk driving and criminality. Now Dre has gotten Marjorie Taylor Greene suspended from Twitter for using some beats from a 1999 song he recorded with Snoop Dogg.

Rap music icon Dr. Dre objected to the unapproved use of one of his most popular songs, and it led to the suspension of the Twitter account of Rep. Marjorie Taylor Greene (R-Ga.).

Greene posted a video of herself in Congress with the soundtrack composed with the beat of “Still D.R.E.,” a song by Dr. Dre and Snoop Dogg from 1999.

“It’s time to begin … and they can’t stop what’s coming,” wrote Greene in the tweet with the video.

Despite it being an innocent enough sample and message, the good Dr objected to his music being used for a conservative politician. He took time out from his busy schedule of beating women to say this.

“I don’t license my music to politicians, especially someone as divisive and hateful as this one,” said Young.

Greene then confirmed to TMZ that her social media account had been shut down over the use of the copyrighted song.

Dr. Dre. should know a bit about division and hate, having made the lion’s share of his fortune on the back of glorified violence towards women, sex, and drug dealing through his music. As art often imitates life, Dre famously has lived out some of his violent fantasies.

In 1991, Dr. Dre punched journalist Dee Barnes repeatedly, and then threw her through a bathroom door before throwing her down a flight of stairs.  Ms. Barnes sued Dre and the case was later settled out of court. Dre responded at the time in a Rolling Stone interview stating, “I just did it, you know. Ain’t nothing you can do now by talking about it. Besides, it ain’t no big deal – I just threw her through a door.”

It should be noted that the victim was a black woman. Dre brushed off the incident at the time, and Barnes was blacklisted from the industry. But by all means Dre, MTG is the divisive and hateful one in this scenario. For her part, MTG had this to say in her defense, while roasting Dr. Dre in the process.

Dr @drdre is a joke. What are you a Dr of, Ignorance, Drugs, Criminal gang banging, Disrespecting women? Spare us your virtue signaling, MTG has more class and intelligence than you'll ever have, but hang tight, subway will be featuring washed-up rappers next. https://t.co/AEklCOO00Y pic.twitter.com/xFTn3YmS7X

“While I appreciate the creative chord progression, I would never play your words of violence against women and police officers, and your glorification of the thug life and drugs,” said Greene.

There’s no denying it is a catchy beat, but Green is correct with her description of the song. Why in 2023 such misogynistic lyrics and violent imagery is still celebrated flies in the face of woke culture and the hypocritical liberal agenda.

Greene had posted the video in celebration of the election of Rep. Kevin McCarthy (R-Calif.) to the speakership of the House of Representatives. Partisan infighting led to 15 rounds of voting before enough dissenters acquiesced to concessions offered by McCarthy.

Certainly, the rapper is free to protect his intellectual (if you call it that) property, but feigning indignation with MTG and the GOP message only plays like someone who is classically out of touch with the world around them, as you would expect a washed-up billionaire rapper to be.