Me-Ouch! Taylor Swift’s Cat Worth More Than Most Americans 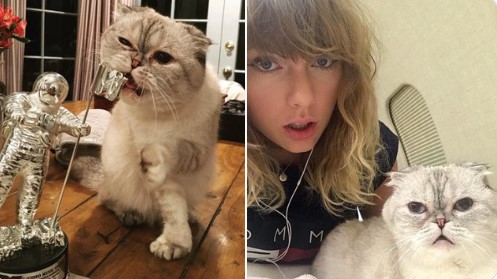 Taylor Swift is a force of nature. If you hate Taylor Swift, you hate her for the same reason people hate Nickelback, Creed, and Donald Trump. For no real reason except it is cool to hate her. She is beautiful, talented, modest, and can craft a song like few others of her generation. That’s not to even mention her pussy cat. While Taylor Swift has more of a net worth than some small countries and most everyone you will ever know, the net worth of her cat will probably depress you. In a purrfect world we would all make more than our pets, but things are what they are and to be honest, my dog is probably more talented than some people I know, so for a cultured feline like Swift’s to have an insane net worth isn’t cat-astrophic.

In a new report by All About Cats, the 33-year-old music sensation’s cat “Olivia Benson” is ranked as the world’s third richest cat.

She’s worth a reported $97 MILLION.

Taylor Swift’s cat Olivia Benson is the world’s third richest pet with an estimated net worth of $97 million, according to a report by All About Cats. pic.twitter.com/tM82DrGUbX

Not only is it awesome that there is an organization called “All About Cats”, but it is also amazing that Swift named her cat after her favorite Law and Order character. Thank goodness her favorite character wasn’t Ice T-s. Olivia Benson is the hardened veteran of Law and Order: SVU. She helps investigate and solve these “vicious felonies” with the help of her fellow officers of the Special Victims Unit. Presumably Taylor’s cat just sits around all day napping and licking herself. Apparently, Olivia is a cat of many colors. Check out her numerous accomplishments.

“Olivia has found success outside of the world of Instagram influencing,” the report reads. “The Scottish fold earned her fortune starring alongside her owner in several music videos, has crafted her own merchandise line, and has had cameos in many big-budget ads.” Some of those commercials were for significant companies such as Diet Coke, AT&T and DirectTV.

Fans may also recognize Olivia from appearing in various Swift music videos for hit songs like “Me!” and “Blank Space.”

Olivia Benson, despite being a cat, has accomplished more than most human beings. Does that make you sad? It shouldn’t because a cat can’t spend money and will die long before most of us, so essentially once again #teampeople wins again. That still doesn’t diminish Benson’s numerous accolades. Not only does Olivia Benson star in numerous music videos and commercials, but she also has the honor of cuddling with Taylor Swift and licking her face (presumably). Good work if you can get it. Personally, I took Swift for a dog girl, perhaps a tropical bird or two and maybe a ferret. It is nice to know she is a down to earth cat girl.

Although Olivia is ranked third on the top animal list, just a few million behind an Instagram-famous cat named “Nala,” they are nowhere NEAR the No. 1 holder.

I won’t go into who number one is in the animal kingdom except to say it is dog-gone unfair, and it’s a ruff life. Suffice to say, despite the disparity in net worth, I will choose being a biped and having higher brain function over licking myself and napping all day every time, even if the latter does sound pretty good. Especially if Taylor Swift’s lap is involved.