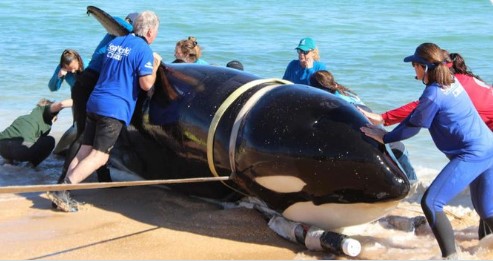 A massive, 21-foot killer whale weighing an estimated 3-and-a-half ton has beached itself and died on the Florida coast just north of Daytona Beach. The 7,000-pound female orca washed ashore and died, requiring dozens of people and heavy equipment to move it to Sea World for a whale autopsy.

Authorities said that SeaWorld will be performing a necropsy to establish the killer whale’s cause of death following the incident.

I’m no marine biologist, but this looks like suicide. What other reason would cause a whale to swim so close to the shore, beach itself, and die? One would think whales are intelligent enough NOT to get beached, as they LIVE in the ocean. Unlike people who get in the water for fun and recreation but sometimes drown, whales aren’t exactly making excursions onto the land for entertainment purposes. Not even Lizzo.

The incident occurred early Wednesday morning at the south end of Jungle Hut beach in Flagler County, Florida — approximately 30 miles north of Daytona Beach — when a 7,000 pound female orca washed ashore, according to an announcement made by the Flagler County government on social media.

It is thought that the whale was alive when it beached itself but eventually lost its life when it couldn’t make it back into the sea.

If the whale was indeed alive and “beached itself,” what other possible explanation could there be? Perhaps the orca was having a mental health crisis? Perhaps it was sick of Joe Biden and the Democrats. (I always took orcas as conservatives). Either way, considering there isn’t exactly an abundance of orca whales swimming around, it’s tragic to lose one in this manner. Orca whales generally prefer colder water, which leads to the question, was this a vacation accident? Perhaps the whale was in Florida for an early Spring Break? Spring Break is usually good whale watching time, but it is a bit premature as, typically, Spring Break is in the Spring.

Killer whales are found in all oceans around the world but are “most abundant in colder waters like Antarctica, Norway, and Alaska,” according to the National Oceanic and Atmospheric Association (NOAA). “They are also found in tropical and subtropical waters.”

The global population of killer whales is estimated to be around 50,000, and the average lifespan for a female killer whale is around 50 years, but they can also live up to at least 90 years in the wild, according to the NOAA.

The global whale population just dropped by one, even though Lizzo is embarking on a world tour this Spring. It’s tragic and shocking to see an orca lose its life like this, and hopefully the folks at Seaworld can figure out a reason. In the meantime, if you are whale watching on Spring Break, maybe keep an eye on the water as well.