Man Obsessed With School Shootings Just Did Something Ridiculous 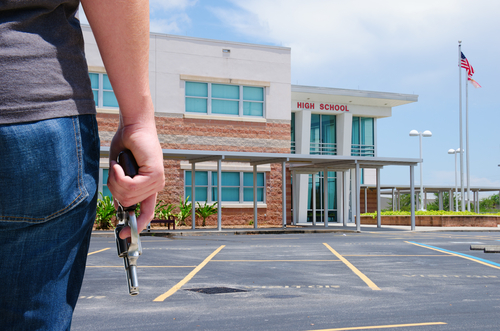 A Florida man with an uncommon obsession with mass shootings has been arrested and charged after leaving dead animals at a memorial in Parkland. This memorial was where the 17 people who were victims of the Parkland school massacre were laid to rest.

Identified as 29-year-old Robert Mondragon, he faces three felony charges for disfiguring a monument in front of Parkland’s Marjory Stoneman Douglas High School and for violation of his battery probation. In addition, he faces five counts of indecent exposure and breaking a risk protection barrier. This information was revealed by the police authorities on Friday.

The sheriff’s office revealed that a school crossing guard found a dead raccoon and an opossum on the memorial bench in late July. He also found a duck with its chest cavity cut open.

In addition, a surveillance video acquired by the detectives showed a man exiting a black Nissan vehicle at the memorial on the 30th of July. The man entered the memorial site and spent several minutes before returning to his vehicle and leaving the area. The following night, the exact Nissan vehicle was also spotted driving slowly near the school.

The deputy mentioned that the accused was the only person in the car when he noticed blood and bird feathers on the passenger side floorboard in front of the car. However, Mondragon tried to explain the dead bird saying he enjoys its scent. He said he likes “the metal and blood smell that emits from the dead animal.”

A Broward County man is in jail, accused of placing dead animals on the memorial in Parkland (not at the school).

Robert Mondragon is charged with disfiguring a monument.

Investigators say he also has a “disturbing fascination with mass school shootings.”@WPBF25News pic.twitter.com/fOBUquk6dT

Moving on, Mondragon was arrested after four days for violating his battery probation and his risk protection order, in addition to indecent exposure. After obtaining warrants, Mondragon’s personal properties, including his cellphone, car, home, and his social media accounts, were scoured.

After a while, they were able to link the duck and raccoon incident to him as pictures of him holding the dead duck with its cavity open were found. There was also another picture of a dead raccoon on the floor of his car, which was taken that day.

Further investigations revealed that Mondragon was a big fan of mass school killers, both fictitious and real. He was clearly fascinated with the likes of Tate Langdon. Langdon is a character based on the Columbine High School massacre from the television series “American Horror Story.”

At a press conference Friday, Broward Sheriff Gregory Tony said, “He fits every classification that it’s coming. We’ve been lucky, and luck is not a strategy.”

Mondragon’s legal counsel Andrew Coffey pleaded that his client “had a troubled and traumatic childhood.” Though he did not give details, he added that Mondragon was the child victim of a crime awaiting trial.