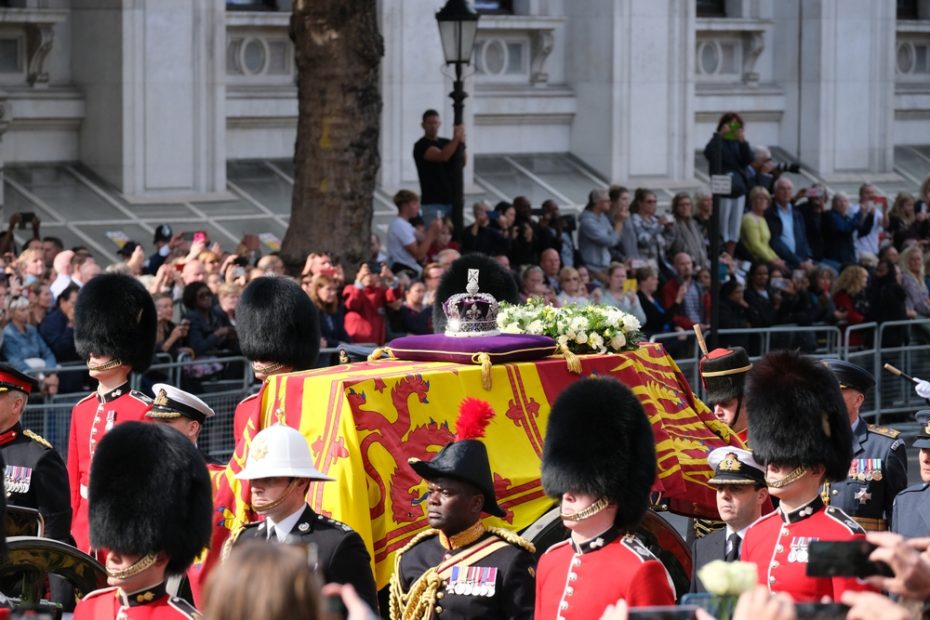 Mourners were left shocked last night when a man ran out of the line of people to grab Queen Elizabeth’s coffin as she lies in state at the Palace of Westminster. The man had reportedly waited for around 12 hours in the queue alongside mourners, who said that while everyone else in the line was chatty and sharing food and stories, he remained silent the entire time. As he entered the hall, he broke free from the line of mourners and rushed towards the coffin. The man, who has not yet been named, pushed a child out of his way and rushed towards the coffin.

He just managed to touch the Royal Standard which is draped over the Queen’s casket before he was tackled and pinned to the ground by cops. In photographs, he can be seen smirking as he is restrained while open-mouthed, horrified mourners stand looking aghast at the scene. The live feed which is available to watch online 24/7 briefly cut away at around 10pm last night as the incident unfolded, and the Metropolitan Police has confirmed he was arrested and remains in police custody on suspicion of a public order offense.

It is not yet clear as to what the man’s intentions had been but those who had been waiting in line with the coffin grabber described how he had been behaving strangely:

“He stood out to me as we were in the queue for 14 hours from start to end and he was some way ahead of us, even so we noticed him as he stood out,” said Jon Williams who had waited in the line near the man. “And he only stood out as most people in the queue were talking to each other and interacting however he wasn’t. I saw a few people next to him trying to strike up conversation, but he seemed to keep himself to himself.

“He got to the coffin and seemed to lift up the flag, he didn’t try to pull out off from what I could see. As I said people were in shock although they seemed to try to carry on. What surprised me is the guards didn’t appear to move or help, it was all left to the police.”

Another line-waiter described how one panicked woman screamed as she saw the man lunging towards the Queen’s coffin: “We saw him (the man) in the queue from the beginning of the queue and throughout the day, he was by himself.  When we entered the room we were at the top of the stairs when we saw the incident. A lady screamed as it happened it was quite unnerving. Although he was detained and people kept calm and carried on.”

As the man scrambled to reach the coffin, he pushed a 7-year-old girl, Darcy, out of his way. The little girl’s auntie, Tracey Holland said: “A person decided they were going to push my seven-year-old niece out the way, run up to the coffin, lift up the standard and try to do I don’t know what. She was grabbed out the way and the police had him within two seconds.

Girl, 7, queued for 15 hours to see Queen – only to be shoved aside by 'coffin grabber'@DailyMailUK pic.twitter.com/udvnRDGEZ8

“Terrible, absolutely terrible, so disrespectful and unbelievable – and this poor little seven-year-old child, this is her lasting memory of the Queen.”

The Queen will lie in state until Monday morning when her funeral service will begin in Westminster Abbey. After that, her coffin will be taken via horse-drawn carriage the 22 miles to Windsor Castle, where she will be laid to rest alongside her father, King George VI, her mother, Queen Elizabeth and her sister, Princess Margaret.

The Queen’s late husband, Prince Philip, is buried in another part of the castle.