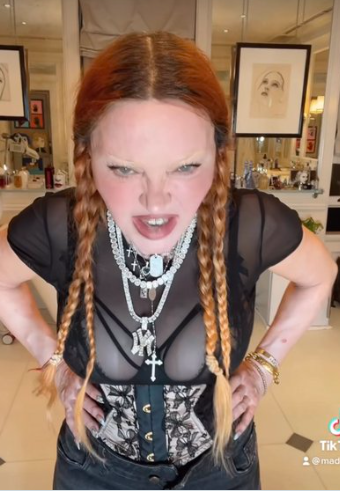 Madonna has been a cultural icon for over four decades. Sadly, the 64-year-old washed-up superstar refuses to go quietly into that good night. In fact, since President Trump took office in 2016, her behavior has grown increasingly bizarre. Since famously threatening to blow up the White House, with no federal investigation, I might add, to dressing and acting like a bizarro grandmother on social media, Madonna has driven her legacy off the road and into a ditch and might not be able to pull it out.

Madonna burst onto the scene in 1983 and took the music world by storm. Her combination of girl-next-door looks and brainless bubblegum music was hard to resist, spawning a generation of 14-year-old lookalikes. Madonna continually reinvented herself in the 80s and beyond, staying relevant as her fanbase grew up. She transformed from the girl next door to the girl you wouldn’t trust your boyfriend around, and her fans ate it up. Unfortunately, as middle age and father time started to take their toll, Madonna refused to age gracefully, instead pulling obscene stunts on stage and resorting to plastic surgery to the point her face looked fake. It hasn’t been a good run for Madonna in the last decade. Now the weird Instagram posts have fans saying enough! Check this out.

On Wednesday, December 7, the“Like A Virgin” artist took to Instagram with a strange video depicting her looking like an entirely different person, donning bold red locks and a series of odd accessories, including a lace face mask, black sunglasses, and what appears to be a riding crop and tooth gems.

Does Madonna even own a horse? Why the need for the riding crop? As for the face mask, that probably would have been a great idea a decade ago when she started to transform her face into a wax museum figure. Her fans were predictably upset.

“Sorry this looks nothing like Madonna. I didn’t even know it was her till it said it…” commented one fan, seemingly referencing the video’s identifying caption.

“Madonna please stop botox and surgery, and do a new album,” added another alongside a CD emoji.

“What are you doing??!!” added a third. “You are an amazing singer and you don’t need to be doing all of this! It’s making you look old and desperate for attention….please stop! You’re ruining your beauty!!!”

It is a sad transformation indeed. Madonna could have aged naturally and focused on the maturation and evolution of her music. Many superstars have stayed viable well into their 70s and beyond. Steven Tyler from Aerosmith still performs and looks fantastic, and he is 100 (kidding). The point is Madonna transformed from “Like a Virgin” to like a weirdo without giving her fans a mature, adult record. Her loyal fanbase deserves one last hurrah before Father Time takes her down for good, but sadly it appears as though Madonna will be unable to let it go.