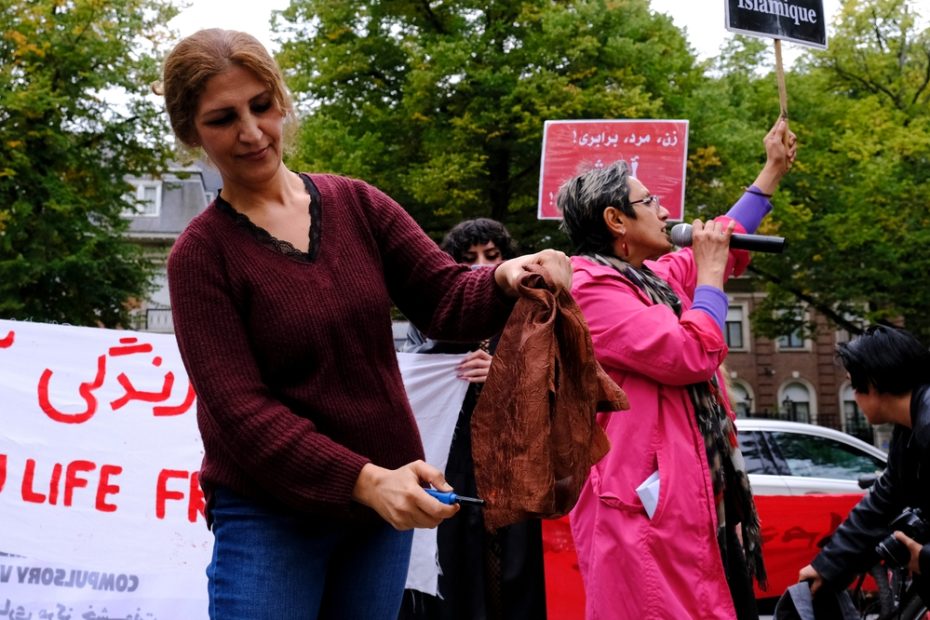 Iranian women’s rights protesters are continuing to risk their lives by protesting against stifling, sexist Islamic laws in the nation sparked by the death of Masha Amini after she was arrested by the ‘morality police’ for not wearing a head covering.

Iranian women have taken to the streets of Tehran to burn their hijabs and cut off their long hair as they continue to protest against the Islamic regime which has seen them treated as second-class citizens for generations.

Crowds of men and women cheered and danced around a street bonfire in the city of Sari earlier this week as women ceremoniously threw their hijabs and burkas into the flames. The anti-government, protests spread to dozens of cities around the country.

Masha Amini died two weeks ago after she was dragged off the streets of Tehran for failing to comply to Iran’s strict dress code for women. Iran’s Islamic Republic requires women to cover up in public including their hair with a hijab or headscarf.

The ‘morality police’ or Gasht-e Ershad (Guidance Patrols) are tasked with reprimanding women if they are deemed to be showing too much of their hair, their trousers or tops are too tight-fitting or if they’re wearing too much make-up.

Punishment for violating the rules can include a fine, imprisonment or public flogging.

Amini, 22, was taken to a detention center to ‘teach’ her about the Islamic hijab rules. While she was there, Iranian authorities claimed the young woman suffered a fatal heart attack, but her fellow inmates say she was severely beaten by guards.

She was taken to hospital but died after three days in a coma. Leaked medical documents later revealed she had suffered a fractured skull which caused cerebral hemorrhaging and a stroke.

“Mahsa Amini’s tragic death and allegations of torture and ill-treatment must be promptly, impartially and effectively investigated by an independent competent authority, that ensures, in particular, that her family has access to justice and truth.

“The authorities must stop targeting, harassing, and detaining women who do not abide by the hijab rules.”

Many brave activists have lost their lives in the protests so far. Three were shot dead by security forces in Urmia, Piranshahr and Kermanshah and “dozens” of others, including children, have reportedly died for the cause. But the angry Iranians are keen for the campaign for change to continue despite the dire risks to their health and safety.

“Women! Life! Freedom!” they have been chanting all over the country since Amini’s death, and the message is even being picked up in other Islamic nations. In Afghanistan’s capital, Kabul, protesters outside the Iranian embassy barred placards reading:

“Iran has risen, now it’s our turn!” and “From Kabul to Iran, say no to dictatorship!”

Women burned headscarves and cut their hair amid protests across Iran sparked by the death of a young woman in custody.

Celebrities, filmmakers and sports stars have showed their support for the cause, and the country’s national football team remained in their black tracksuits during the Iranian national anthem before a match against Senegal in Vienna.

Meanwhile, the Iranian government has issued the stark warning that it will “take action against the celebrities who have fanned the flames of the riots”, said Tehran provincial governor Mohsen Mansouri.

“We all are saddened by this tragic incident [but] chaos is unacceptable,” he told state TV.

“The government’s red line is our people’s security … One cannot allow people to disturb the peace of society through riots.”