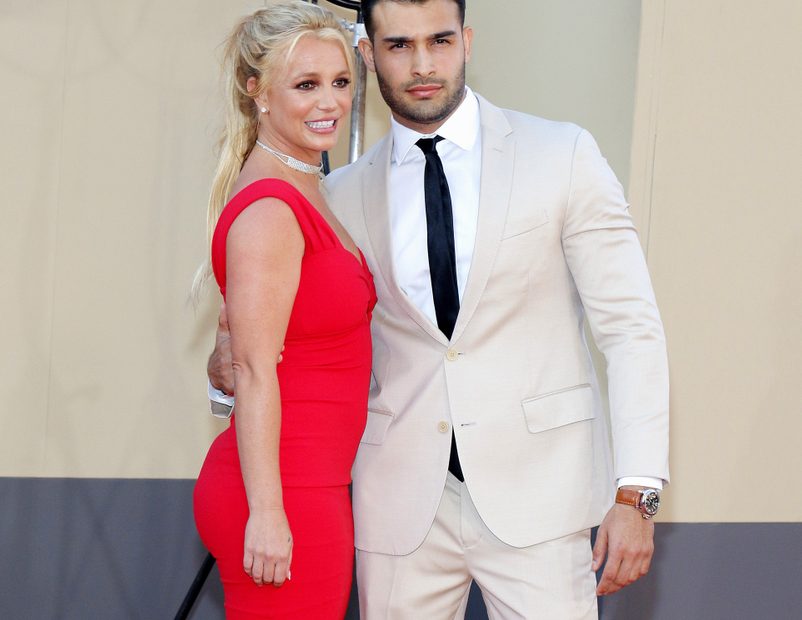 It’s Britney…hitched! The queen of pop’s wedding was everything you’d expect and more including a very dramatic gate-crashing which led to an arrest!

Britney’s lavish wedding ceremony spared no expense as the singer wed her long-term partner Sam Asghari, 28, in the grounds of her $7.4 million California mansion on Thursday.

The singer, 40, set up a luxury marquee within the 20.98 acres of land of the mansion filled with hundreds of pink roses.

The couple first started dating in 2016 after meeting on the set of Britney’s Slumber Party music video but didn’t get engaged until September last year. Britney will be hoping this match will be the third time lucky as her previous two marriages ended in divorce.

While she’s known for her raunchy make-up and styles, Britney, 40, opted for a softer, girly look for her big day with the help of celebrity make-up artist Charlotte Tilbury who said she wanted to create “a timeless, universally-flattering, rose petal pink bridal look to give her an all-over, beautifying love glow”.

Versace made four custom-made gowns for the bride to wear throughout the day, and Britney wowed in an off-the-shoulder white dress with a sweetheart neckline and sweeping trail as she said “I do”.

The first photos from Britney Spears and Sam Asghari's wedding have been released. https://t.co/z6VYLPuWGA pic.twitter.com/du00TxrnCl

She finished the look with a traditional veil, white gloves, and a choker necklace.

Later in the evening, Britney opted for a figure-hugging red cocktail dress and then a Versace blazer with what appeared to be a hot-pink bikini underneath.

“She looked so gorgeous and happy.”

The marriage was witnessed by a select group of celebrity friends including Madonna, Drew Barrymore, Salena Gomez, Paris Hilton but Britney’s estranged family including her father Jamie Spears, did not attend.

But the fairytale wedding wasn’t without its dramas! According to TMZ, police were called to Britney’s mansion after her ex-husband Jason Alexander tried to crash the event.

Jason, 40, who showed his support for the #FreeBritney campaign in 2020 as the embattled star fought for freedom from a legally binding contract from her controlling father, live-streamed on the street outside.

The jilted ex-husband told his Instagram followers that Britney was his first and only wife and that he was there to disrupt the event. Jason can be seen engaging in a physical struggle with security officers before his phone freezes and cuts out.

Later that evening, TMZ reported that Jason had been arrested and charged with trespassing, vandalism and two counts of battery following the struggle with members of Britney’s security team.

Britney’s attorney, Matthew Rosengart said he was “absolutely livid” at the uninvited guest.

“I am personally working with the sheriff’s department to ensure Mr. Alexander is aggressively prosecuted to the fullest extent of the law,” he added.

Jason eloped with Britney in a Vegas wedding in 2004. Their marriage lasted all of 55 hours.