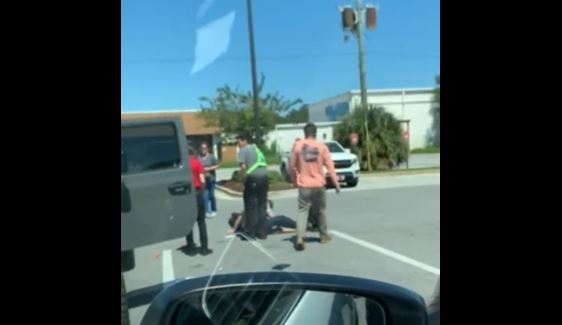 Adding yet more proof to the truism that Chick-fil-a has the best employees by far of any fast-food restaurant is a recent video coming out of Fort Walton Beach, Florida. There, a woman with a baby was in the Chick-fil-a drive-thru line when someone started trying to carjack her.

Rather than just watch or call the cops, or film it as many people now do, a brave young man working for the fast food chain leaped into action and defended the woman, coming to grips with the carjacker in full view of everyone waiting in the drive-thru line. Watch that here:

A Chick-fil-A employee in Fort Walton Beach, Florida, sprang into action to help a woman with a baby who was being carjacked.

The Okaloosa County Sheriff’s office commented on the matter on their Facebook page, saying:

A young employee outside a Fort Walton Beach area restaurant rushed to help a screaming woman holding a baby this afternoon after a man grabbed her keys and tried to take her car.

The Okaloosa County Sheriff’s Office has charged 43-year old William Branch of DeFuniak Springs with carjacking with a weapon and battery.

The victim was getting the infant out of her car at a restaurant at 743 Beal Parkway when she says Branch approached her wielding a stick and demanding her keys.

He then grabbed the keys from the waistband of her pants, opened her car door, and got inside.

When the victim began screaming for help an employee at Chick-fil-A ran to intervene. Branch punched the young man in the face but the second victim was not seriously injured.

The employee says Branch had been involved in another incident shortly before the carjacking attempt.

In a later post, the same sheriff’s office added a note of thanks to the brave young man who stepped up and fought off the carjacker, saying:

In reference to the Fort Walton Beach Chick-fil-A employee who ran to the aid of a woman with a baby who was being carjacked, we want to say a sincere thank you to Ms. Kelner for providing video of a portion of the encounter. (see news release in prior post). It has been provided to our deputies handling the case. A major shout-out to this young man for his courage!

Many expressed joy at the scene of the young man stepping in to protect the woman and her baby, along with what happened moments later when others nearby rushed to help the young man deal with Mr. Branch once he was pinned to the ground.

Unfortunately, not everything that has happened at Chick-fil-a as of late has been as great from the perspective of many conservatives. Namely, the restaurant stopped giving to pro-family organizations that the LGBTQ lobby protests against, as the Post Millenial reported, saying:

For years now, Chick-fil-A, the Georgia-based chicken restaurant has faced backlash from LGBT groups for their hefty donations to The Salvation Army and the Fellowship of Christian Athletes.

Perhaps the Cathy family should take a lesson in courage from this young employee of their Fort Walton Beach restaurant.