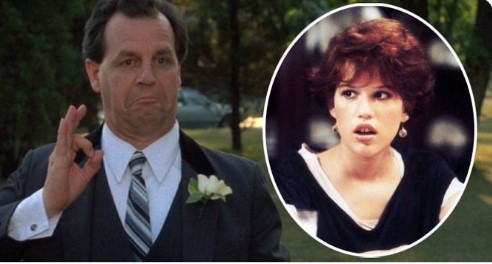 The 1980’s were truly the pinnacle of teen comedies. No era has matched such classics as Fast Times at Ridgemont High, Porky’s, The Breakfast Club, Ferris Bueller’s Day Off, the list goes on and on. At, or near the top of the list is the John Hughes classic Sixteen Candles. The movie was Molly Ringwald and Anthony Michael Hall’s breakout hit and has been a much-loved tradition ever since. However, as the famous every-dad from the movie, Paul Dooley (face it we all wanted him as our dad) explains in his new book, if not for one rewrite of one line, Sixteen Candles would’ve taken a dark turn, even by 1980’s standards. Check this out.

One of the most beloved movies of the 1980s — Sixteen Candles — almost had a very, very weird moment had someone not realized that it may read as just a bit pervy.

Dooley is now 94, and he recently released a memoir titled Movie Dad: Finding Myself and My Family, On Screen and Off. In it, he discussed a brief moment in the script that got the ol’ red pen treatment. Had it been left in, it would have drastically changed the perception of the scene between himself and Ringwald.

Let’s be honest for a moment, shall we? The movie is pretty pervy by today’s standards. Of course, the movie was made during another era, so it should be held up to the standards of its own era, not now. Too often the woke crowd wants to cancel things and people from different eras. It’s not the movie’s fault that this was just considered good, clean comedy in the 80’s just like it’s not “Baby It’s Cold Outside’s” fault for the era it was released in. There. Now that we have that out of the way, in a movie that featured a stereotypical Asian character named Long Duk Dong, what could’ve had been so bad that it had to be taken out?

In one of the more memorable scenes, Paul Dooley is talking to Molly Ringwald after he remembered everyone had forgotten her birthday. Being the perfect dad, Dooley had a heart to heart with Ringwald. What didn’t happen next likely spared this movie from the woke gallows.

“Near the end of their talk, the script had the dad giving a friendly pat on his daughter’s behind while saying, ‘Where the heck are your panties?’” Dooley wrote.

“A pat on the behind? If you can detect missing panties, that’s more like copping a feel.”

Dooley wasn’t the only one who thought this would be weird. So did Ringwad’s real-life mom who was with her on set.

“I would have the dad say, ‘When you finally meet your Mr. Right, make sure he knows you wear the pants in the family,’” Dooley writes.

“Molly’s mom loved it,” the actor wrote. “We took it to John Hughes, who liked it too. That became the ending to the scene.”

Oh my. It should be recalled that her character Sam gave her panties to the geek, Anthony Michael Hall so he could charge admission and show them to his geek fans to prove he scored. Ok, so maybe the movie wasn’t all that clean and wholesome. We never gave it a second thought in the 80’s! Looking back, the scene where Jake dumped his blackout drunk girlfriend in the car with Farmer Ted (Hall), and they eventually ended up asleep in a church parking lot assuming they had sex together (Farmer Ted didn’t have a license and was underage), is also a little troublesome. I better stop here before I ruined the rest of the movie for myself. Good save Paul Dooley, and thanks for being the world’s best dad!