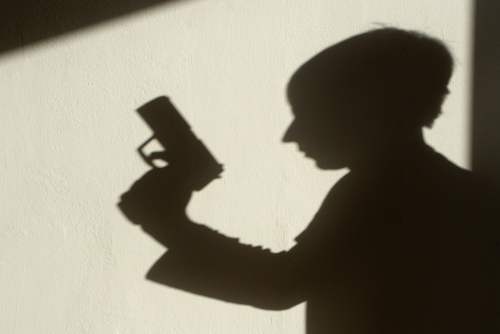 Around 12:30 p.m. on August 12, in the steamy town of Mesa, Arizona, a brave man named Emmanuel Reynoso Avila darted into his home and grabbed his gun.

Why? Because violence had come to his community and he was there to see it: in a shocking turn of events for the day, he had just witnessed a man slam into his next-door neighbor, Christopher Heimer, with his vehicle.

Apparently, the incident started when Heimer was walking on the sidewalk after having been drawn out of his home by a man named John Lagana, who had been laying on his horn like a maniac. As Lagana apparently hoped, the constant honking drew Heimer toward him and Lagana took advantage of his plan working, slamming on the gas, swerving up onto the sidewalk, and hitting Heimer. The Mesa police department, commenting on what happened, said:

After speaking with numerous witnesses and reviewing video surveillance cameras, officers learned that 63-year-old Christopher Heimer was walking westbound on Alder at the same time Lagana was driving eastbound on Alder. Lagana swerved out of the roadway and struck Heimer as he was walking on the north sidewalk, throwing him into the landscaping of a fourplex apartment complex. Lagana continued to travel eastbound on the sidewalk, damaging mailboxes and landscaping before turning around and driving back toward Heimer. Witnesses say Lagana again drove onto the sidewalk, into the landscaping and ran over Heimer, who was already lying injured on the ground. Lagana then got out of his vehicle and proceeded to stomp on Heimer’s head multiple times. This is when one witness used their firearm to put an end to Lagana’s actions.

Witnesses further told officers that Lagana was parked in a vacant lot, just northwest of Heimer’s residence, and that Lagana honked his horn repeatedly, until Heimer came out of his home. Observations on scene showed where Lagana accelerated through the empty lot onto the street. Officers also found skid marks from Lagana’s vehicle in the roadway and on the sidewalk where the incident occurred.

It was then that Avila sprung into action, saying that he ran to get his gun as Lagana continued his attack on the community, damaging property after killing Heimer by running him over multiple times after the initial attack.

Avila, speaking about what happened, told KNXV that he saw his neighbor “get full on rammed by someone who was supposedly his friend. … We saw Chris fly through the air. We saw him land. He was unresponsive.”

Adding why it was that he ran to arm himself, Avila said “I couldn’t just stand by and watch my neighbor die senselessly.”

So, as Lagana ran over Heimer and then jumped out of his car to start stomping on him, Avila drew a bead on him and prevented him from getting away by holding him at gunpoint.

Speaking about what happened, Avila said:  “I yelled ‘Get out of the car.’ I shot a warning shot, just to let the guy know I was serious.”

As a side note, warning shots are generally a bad idea: only fire if you feel you need to, and if you fire make sure to end the threat. Warning shots can be used by the defense to show you weren’t actually fearful that your life or the lives of others were in danger, or could put bystanders at risk.

The Blaze, commenting on why the attack might have occurred, said:

Although it has been suggested that the suspect targeted Heimer over a parking dispute (Heimer had permitted Lagana, who was homeless, to park his car on his property), Lagana hinted at another possible motive. He reportedly stopped answering detectives’ questions after revealing that he had recently learned that his ex-girlfriend was living at the victim’s house.

Lagana has been charged with first-degree murder and is set to appear in court on August 18.

Watch the report on the attack and Avila’s brave response here: