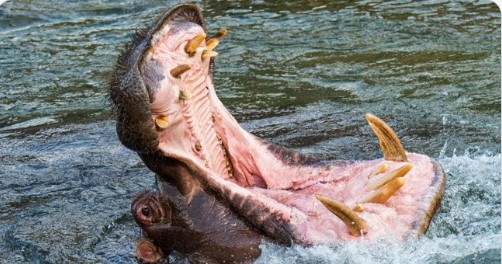 It’s tough being an American in 2022, isn’t it? Crime, homelessness, high gas prices, skyrocketing food prices, so many first world problems, right? Joe Biden has run our country off of the road right into a ditch. Guess what isn’t living in the lake next to the ditch. A hippopotamus! Sure, America is fraught with peril. Hell, in Florida you can encounter an alligator, poisonous snakes, panthers, and meth-heads all in the same afternoon. What you won’t encounter in the lower 48, or the other two states in fact is a wild hippo, ladies’ night at the Panda Buffet notwithstanding. In certain parts of the world it is a valid concern that at any given moment you could be eaten by a lion, mauled by an elephant, bitten by a cobra or swallowed by a hippo. I know they are hungry, hungry, but this is insane! Recently a two-year-old boy was playing by a pond in Uganda, and next thing he knew he was waist deep in a hippo’s mouth. Thanks to the quick thinking of some local bystanders, the ending was better than you would think. Check this out.

Around 3 p.m. on Dec. 4, 2-year-old Iga Paul was playing near the shores of Lake Edward. Suddenly, a hippopotamus attacked the boy who lives close to the lake.

The hippo reportedly grabbed the small boy by his head and “swallowed half of his body.”

“It took the bravery of one Chrispas Bagonza, who was nearby, to save the victim after he stoned the hippo and scared it, causing it to release the victim from its mouth,” according to the Uganda Police Force.

The cliche “not all heroes wear capes” is a bit played, but in Uganda it rings true. While most Americans would be going full Biden (pooping their pants), the quick thinking Chrispas Bagonza leapt into action by unleashing a hell-storm of stones straight into the crazed hippo’s grille, causing the hungry river horse to let go of his mid-afternoon snack. Apparently, rocks are a hippo’s kryptonite, or maybe since the hippo is an herbivore by trade, he didn’t like the taste of people meat.

Despite being herbivores, hippos can become dangerously aggressive when they feel threatened. Hippos are one of the most dangerous animals – killing approximately 500 humans a year. The jaw of a hippopotamus can open at a 180-degree angle. Hippos have one of the strongest bites in the animal kingdom – a powerful 2,000 pounds per square inch.

That is a terrifying, adorable killing machine. Hippos can also run up to 20 miles per hour and are accomplished swimmers, hence the insulting nickname of “river horse”. It remains to be seen why a 5-ton monster like a hippo would feel threatened by a two-year-old boy, but nature is unpredictable and it’s best to stay away from the shore in Uganda, lest you have to saddle up a river horse and hope the Ugandan Nolan Ryan is chilling nearby to save you.

The 2-year-old boy suffered injuries from the hippo attack and was rushed to a local clinic. He was later transferred to the Bwera Hospital for further treatment. Paul received a precautionary vaccine for rabies, made a full recovery, and was released from the hospital.

Count me amongst the 100 percent of the population that had no idea a hippos could get rabies. Who in the animal kingdom is brave enough to bite a hippo and give it rabies? that’s one bad-ass raccoon. In the end the boy was saved, the hippo was spared the taste of people meat, and a bad ass Ugandan superhero was born. Considering it is Uganda, probably not a bad day.