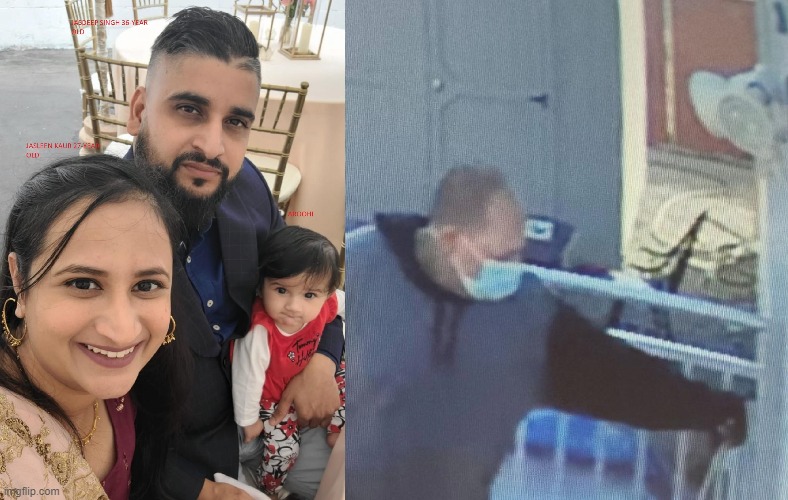 In a series of shocking statements released on Monday evening, the Merced CountySheriff’s Department announced that an 8-month-old infant and her parents, along with an unnamed fourth relative, had been kidnapped by a masked man with a shaved head that should be considered armed and dangerous.

The department said, in the first announcement on that shocking crime:

The Merced County Sheriff’s Office asking the public’s help in locating four missing persons who were kidnapped from the South Merced Area of Merced County.

Currently Detectives are looking for 8-month-old Aroohi Dheri. Detectives believe that Aroohi and her mother Jasleen Kaur (27) & father Jasdeep Singh (36) were taken against their will from a business in the 800 Block of South Highway 59. The Baby’s Uncle Amandeep Singh (39) was also taken against his will with the other family members.

Investigators are currently in the early stages of their investigation and are asking anyone with information to call the Merced County Sheriff’s Office (209)385-7445. We believe the suspect is armed and considered dangerous and were asking the public does not approach the suspect or victims and calls 9-1-1. Information can also be submitted via email at MercedSheriffsOffice@Countyofmerced.com

Following up on that, the department released a second statement shortly afterward in which it shared pictures of the suspected kidnapper, a large, light-skinned man with a shaved head who was wearing a mask. Commenting on the image, the department said:

UPDATE! We believe this to be the suspect in today’s kidnapping. He is described as a light-complected male with a shaved head. He was last seen wearing a hoodie. We consider the suspect to be armed and dangerous. If you see this person, please call 9.1.1. and do not approach him or the victims. We’re asking that anyone with information regarding the identity of this suspect to contact the Merced County Sheriff’s Office Investigations Bureau at 209.385.7445.

And, finally, the department released a video in which the sheriff of Merced County pleaded for help and said that there had been, as of yet, no ransom demand from the suspect. In his words:

“So far as I know no contact has been made nor ransom demands, nothing, from the suspects in this. We need your help.”

This is just the latest shocking crime to rock Greasy Gavin Newsom’s crim-ridden California. Los Angeles has had a particularly rough time of it, with the first six months of this year seeing even more homicides than 2021, as ABC 7 reported, saying:

In the first half of the year, homicides recorded by the Los Angeles Police Department hit the highest level in over a decade.

“181 murder victims. We’re on pace for a 15 year high. This is very, very scary for our city and it’s scary for the residents that we are supposed to protect,” said Sgt. Jerretta Sandoz with the Los Angeles Police Protective League.

So if you’re a Californian looking for a reason besides high taxes and raging wildfires to leave, there it is: crime has plateaued at a horrible level, with the infant abducted from a family business being another sad example of the crime problem roiling the Golden State.