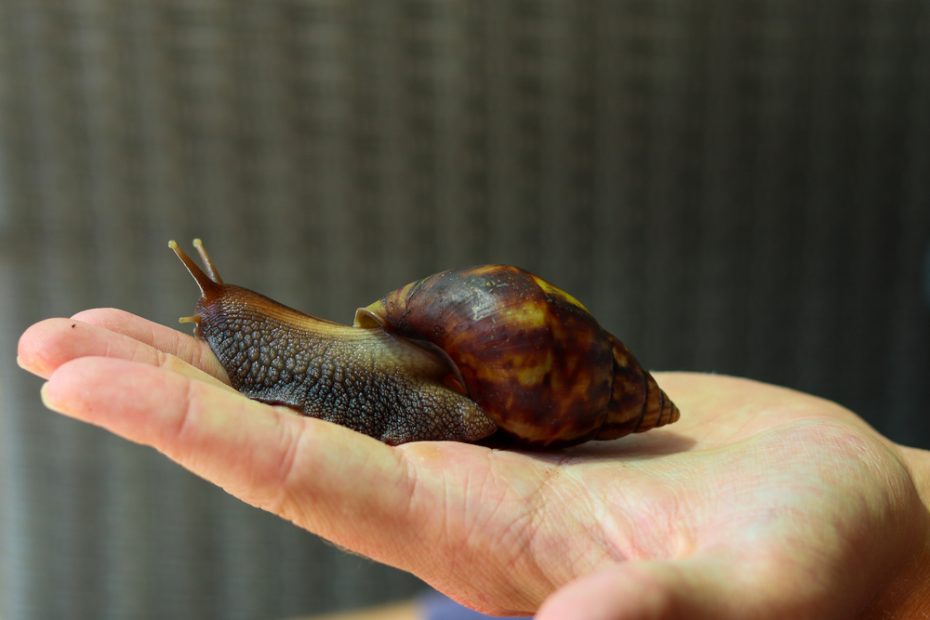 I’ve never found snails to be particularly appealing. Not as a pet, not as a food, not at all. Kind of gross actually.

Now I’m sure the slimy arthropods serve a purpose in the ecosystem. Most everything does. except wasps. Wasps can burn in hell. I digress.

Well, one Florida county is dealing with a slimy, invasive problem (I’m not talking about libs this time) that has caused a small-scale quarantine. Let’s check with our friends at Outkick for the gross details:

Bad news: giant African land snails that cause harm to humans and wildlife have invaded a Florida county.

The creatures can grow to the size of a human fist and are very ugly.

Per the experts, these are the most dangerous snails in the world, feeding on at least 500 different plant species. The snails pose a threat to humans by carrying the rat lungworm parasite, which can cause meningitis.

Great! As if Florida doesn’t have enough to deal with. The Sunshine state already has its share of invasive species, including Burmese Pythons, feral pigs, the Lionfish, Fire Ants, and Democrats, now they have to deal with African land snails. That just leads me to believe that there is a more terrifying African “Sea” Snail. God help us all.

A Florida county is under quarantine due to the discovery of a fast-growing population of invasive giant African land snails.https://t.co/jqW1hx49Xf

On a side note, is it racist to want to eliminate an African snail? I mean, it’s not African American. I say no. Give me a saltshaker and let’s get to work.

Florida Department of Agriculture and Consumer Services confirmed to CNN the detection of these snails in the New Port Richey area of Pasco County on July 3.

Various reports say the arrival of the vile snails caused a quarantine in the county, but state spokeswoman Christina Pushaw says there’s only a restriction on bringing products out of Pasco County.

My mother retired to the New Port Richey area, fortunately when she was there the only invasive species was my stepdad. RIP Earl.

That aside, these slimy critters must pose a serious threat if a county restricted ANYTHING on their account.

“FACT CHECK: Nobody in Florida is under quarantine or lockdown due to Giant African Land Snails. The snails were found in one area of Pasco County,” Pushaw tweeted. “People cannot bring soil, plants, and building materials out of that area because of the snails, but people are free to move.”

Christina Chitty, a public information director at FDACS, says the arrival of the pests in the county is likely the result of illegal pet trade. While African land snails are illegal to own as pets in the United States, some exotic pet shop owners keep them illegally.

Yuck. Why do people insist on keeping exotic pets? Monkey? Fine. A snake? Sure, maybe you want to walk around the park and be known as the “snake guy”. No one wants to be known as “snail guy”. Who wants an arthropod on their shoulder? That would ruin so many shirts!

Do you live in Pasco County? Have you seen an abnormally large snail roaming around? It could be a giant African land snail (GALS)! Learn more about GALS at our @FDACSDPI resource page: https://t.co/IU9OqKEqnU 🐌 pic.twitter.com/yET0F2VwCH

Also, let’s not give the Biden administration any ideas regarding lockdowns or quarantines. The next thing we know the Democrats will be wanting to have mail in voting and drop boxes because of the snail problem.

Eradicating these snails is no simple task as they can lay 2,500 eggs per year. Researchers first identified this type of snail in 1969 and did not eradicate them until 1975. Similarly, the snail-type re-emerged in 2011 and was not eradicated again until 2021.

I always say that every day is an opportunity to learn something new. Today I learned there is such a thing as snail bait.

So, do they spray the bait and round these little critters up into a cage and take them to the edge of town? If my snail knowledge is accurate, they aren’t the fastest creatures around, though I am assuming the African Land Snail is probably faster than its American counterparts.

Regardless, #teampeople. Florida is a booming state with many people looking for work, let’s get “boots on the ground” and eradicate these fellas the old-fashioned way! This is America, we can do it!