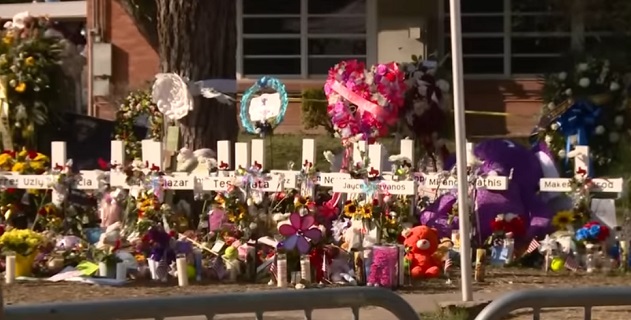 According to a photo, the Border Patrol agent who killed the gunman that was shooting at a school in Texas had a close call with a bullet. “This is the hat the elite, veteran BORTAC Border Patrol agent was wearing when he breached the classroom with a tactical team and engaged/killed the Uvalde school shooter, a CBP source tells me,” Fox News’ Bill Melugin tweeted.

“Graze wound to head. Many BP agents in Uvalde have kids at the school,” Melugin added.

A hole in the mesh of the hat at the top can be seen in the photo.

The Border Patrol agent did not wait for backup before killing the gunman, as he rushed the school single-handedly, a law enforcement official told The Associated Press.

NEW: This is the hat the elite, veteran BORTAC Border Patrol agent was wearing when he breached the classroom with a tactical team and engaged/killed the Uvalde school shooter, a CBP source tells me. Graze wound to head. Many BP agents in Uvalde have kids at the school. @FoxNews pic.twitter.com/924WCOZjsK

Nineteen children and two teachers were tragically killed in what is now the second-deadliest school shooting in U.S. history, as reported.

Many CBP agents live in Uvalde, Texas, where the shooting took place, CBP Commissioner Chris Magnus said in a statement.

“CBP responded immediately to the incident with local law enforcement,” Magnus said in a statement.

“Many of our local CBP personnel live in Uvalde; they call this community home, and they work to protect their families, friends and neighbors every single day,” he added.

The border patrol agents who rushed to the scene of the shooting received an expressed appreciation from Secretary of Homeland Security Alejandro Mayorkas.

“We are grateful for the courageous members of our Border Patrol, many of whom are part of the Uvalde and surrounding communities, who immediately responded to the scene along with local and state law enforcement. Without hesitation, they put themselves between the shooter and students to end the bloodshed and administer medical aid,” said Mayorkas in a statement.

The DHS will continue to work alongside “federal, state and local” law enforcement in the aftermath of the shooting, according to Mayorkas.

An off-duty border agent saved dozens of students and his teacher wife when he got a scary text from her and rushed to the scene of the school shooting.

An off-duty United States Customs and Border Protection agent received a frightening text from his wife, a teacher at Robb Elementary School, and rushed to the building not knowing he would later become a hero.

He was in he middle of getting a haircut and borrowed his barber’s shotgun, got to the school as quickly as possible while there was a school shooting going on, and ended up saving his wife and dozens of children in the process, as reported.

“Help,” she wrote, “I love you.” Jacob Albarado was getting a haircut at the time.

He borrowed a shotgun from his barber, who came with him, and headed to where his wife and his second-grade daughter were hiding in the school, according to The New York Times.

His daughter, 8, was locked in a bathroom and his wife was underneath a desk with her students in their classroom.

This comes on the news that it took police at least an hour to gun down the shooter, as they faced criticism of not rushing into the school to save children. There are conflicting reports that suggest cops did rush in, but some on-lookers claim they didn’t see this and said it took them way too long to get their job done, indirectly blaming them for the loss of more lives.