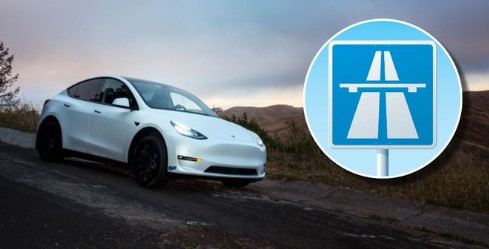 Tesla has a controversial, yet very popular “autopilot” function which allows drivers to relax their attention away from the road temporarily so long as they maintain their hands on the wheel. While this could certainly be a useful function, especially on long trips (you know, the kind you can’t really take in most ev’s), some drivers are finding ways around the safety feature and abusing the autopilot mode.

As technology advances, especially in high-end electric vehicles such as the Tesla, naturally people will attempt to exploit, and abuse said technology. Clearly no vehicles are meant to be driven without human interaction (yet), one Tesla driver in Germany devised an ingenious plan to bypass the safety features and also get some shut eye on the Autobahn.

It happened in Bamberg, a town in northern Bavaria, where a driver was traveling to the town of Bayreuth. The Bamberg Police’s news release says that a 45-year-old man was driving along Autobahn 70 and had his Tesla on autopilot.

Who hasn’t nodded off at the wheel for a few seconds, right? While that is not uncommon, what happened next certainly was, as the Tesla took German police on a (sort of) high speed chase while the driver snoozed away.

The car refused to pull over, and led police on a chase that hit 70 miles an hour.

A patrol car pulled in front of the Tesla. Officers noticed it was maintaining the same distance from the car in front.

From there the Polizei started to do some math. When they pulled alongside the car, their suspicions were confirmed: the man had his seat reclined and was sawing logs.

The Tesla had the radar assist feature on and was maintaining safe distance from the car in front of it, and the side radars were keeping the car in the lane. Sounds safe, doesn’t it? The tuckered-out driver apparently thought so. He was in full seat back mode, possibly with a blanket and pillow as well.

After 15 minutes the driver woke up and took over control of his car. Once the police had the man stopped, it became clear that he hadn’t accidentally dozed off and wasn’t suffering from what the Germans would call “der chronic narcolepsy.”

The man has installed a device — which the police called a “steering wheel weight” that would keep the car’s autopilot system from deactivating while he slept.

“This device is attached to the steering wheel to trick the vehicle’s safety system by pretending that your hand is on the wheel,” the news release said.

It is alarming to say the least that people have devised ways to bypass safeguards for features of the Tesla that already would make me too uneasy to use. Whatever happened to “ten and two” on the steering wheel? I drive with my knee occasionally and have almost wiped-out numerous times with my eyes ON the road. I’m not trusting the Tesla to do the work for me, doesn’t matter how sleepy I am. Just pull over and knock out a power nap. Or do what many American truck drivers do; hit a rest stop and score some speed! Or a Red Bull. Still sounds safer than sleeping on autopilot!