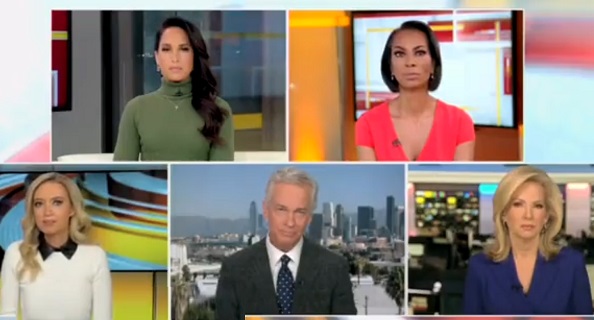 6-time Emmy Award winning journalist and Fox News host Harris Faulkner broke down in tears during a segment discussing the Texas school shooting that left many children and several adults without their lives. Faulkner had posted a Bible verse, Matt. 19:14, on Twitter and they mentioned it on the air. That’s around the time Faulkner became emotional and broke down into tears while live on the air.

Faulkner posted the following on her Twitter page: “Lifting up a verse  for the loved ones grieving in Uvalde, Texas on this first torturous night. #UvaldeMassacre #RobbElementary Matthew 19:14 But Jesus said, “Let the little children come to me and do not hinder them, for the kingdom of heaven belongs to such as these.””

Lifting up a verse

for the loved ones grieving in Uvalde, Texas on this first torturous night. #UvaldeMassacre #RobbElementary

Matthew 19:14
But Jesus said, “Let the little children come to me and do not hinder them, for the kingdom of heaven belongs to such as these.”

Meanwhile, Uvalde police are being slammed by critics for allegedly delaying their response. Some onlookers suggest they were begging the police to rush into the school while the gunman was in the building, but they allegedly congregated outside the school building.

According to AP, at least one onlooker says they didn’t see the police rush in like they should have: “It was 11:28 a.m. when the Ford pickup slammed into a ditch behind the low-slung Texas school and the driver jumped out carrying an AR-15-style rifle.

Twelve minutes after that, authorities say, 18-year-old Salvador Ramos was in the hallways of Robb Elementary School. Soon he entered a fourth-grade classroom. And there, he killed 19 schoolchildren and two teachers in a still-unexplained spasm of violence.

At 12:58 p.m., law enforcement radio chatter said Ramos had been killed and the siege was over.

What happened in those 90 minutes, in a working-class neighborhood near the edge of the little town of Uvalde, has fueled mounting public anger and scrutiny over law enforcement’s response to Tuesday’s rampage.

“They say they rushed in,” said Javier Cazares, whose fourth-grade daughter, Jacklyn Cazares, was killed in the attack, and who raced to the school as the massacre unfolded. “We didn’t see that.”“

As part of the process following tragedy, the government may attempt to pass laws to help prevent the next tragedy, but it won’t come without a right vs left battle.

Thus far, the GOP is blocking gun control attempts by Democrats and Chuck Schumer has blocked a school safety bill that was named after Parkland victims, as reported.

“Senate Majority Leader Chuck Schumer on Wednesday blocked passage of a bill named after two victims of the 2018 Parkland, Florida, school shooting, which would codify a clearinghouse of information for school safety practices into law.

Instead, the Senate is “going to vote on gun legislation,” the New York Democrat said, asserting that Americans “are tired of moments of silence, tired of the kind words offering thoughts and prayers.” Schumer said he would be open to considering Republican Senator Ron Johnson’s Luke and Alex School Safety Act, but he wanted to first focus on proceeding with his proposed Domestic Terrorism Prevention Act. That bill, he said, “will let us take action on guns.“