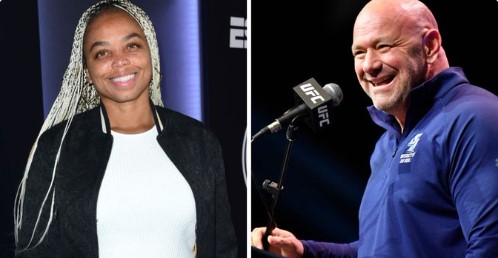 Former ESPN reporter Jemele Hill is one of the most divisive, whiny race baiters in the business. You know it must be bad when ESPN fires you, right? Well, Hill has still managed to find the occasional “media” outlet to allow her to spew her divisive trash, and her most recent diatribe showed up in “The Atlantic” recently. However, shocker, Hill is somewhat right this time. It pains me to write that as much as it does to read it.

Dana White, the head of the UFC and outspoken advocate AGAINST domestic abuse was filmed on New Year’s Eve ironically enough slapping his wife. The sports media has largely ignored the story, and Hill isn’t happy. Why? She claims it is being ignored because White is, you guessed it, white. You can’t make this up. Check this out.

Woke warrior Jemele Hill says the media is ignoring the Dana White scandal because — you guessed it — he’s white.

The UFC President was recently filmed slapping his wife during an argument on New Year’s Eve in Mexico. In a lengthy column for The Atlantic, Hill slams mainstream media (including her former employer, ESPN) for not being outraged enough about the incident.

“In many analogous situations, athletes — especially black athletes — have not been offered the same grace and support that White is receiving,” she said. “They usually face harsher responses.”

Hill is not off base with her complaints. Yet. White has been given something of a pass by many in the media. He has no previous history of violence towards women, has been outspoken in his disdain for domestic abuse, and has no long history of any type of criminal behavior. Did anyone mention White’s wife slapped him first? Ok, that isn’t an excuse, but a reflex reaction is a real thing, and no adult, male or female should expect to slap another adult and not risk some sort of physical retaliation. Again, not an excuse, just food for thought.

Hill used the example of former Baltimore Ravens running back Ray Rice. Rice never played in the NFL again after TMZ released a video of Rice knocking out his then-fiancée in an elevator. The Rice story dominated the news cycle, and (rightfully so) the ex-Raven faced intense public scrutiny.

Hill cited an Instagram post from actor and comedian D.L. Hughley to back up her racism claims.

“The lack of outrage and the obvious double standard have not gone unnoticed among black entertainers,” she wrote.

This is where Hills argument starts to fall apart. There is no comparing Dana White’s incident to Ray Rice. Rice knocked out his wife cold in an elevator with one punch then attempted to prop her up and pretend like she was passed out drunk. Anyone that can’t see the difference is race baiting. In many instances, black athletes that have been guilty of domestic or child abuse have actually gotten off pretty easy. Tyreek Hill of the Dolphins broke his son’s arm and threatened his wife while receiving no real consequences from the league. The UFC has also employed former Cowboy Greg Hardy, who has numerous domestic violence allegations against him. The point is the media tends to take this sort of thing on a case-to-case basis and also on the sport and how big the star is that is involved. Couple that with the fact that the Damar Hamlin story has dominated the news cycle, and it is easy to see why the Dana White incident hasn’t seen the same attention. Domestic violence isn’t acceptable, but there are degrees involved and it isn’t just a black and white issue, despite what race baiters like Jemele Hill say.