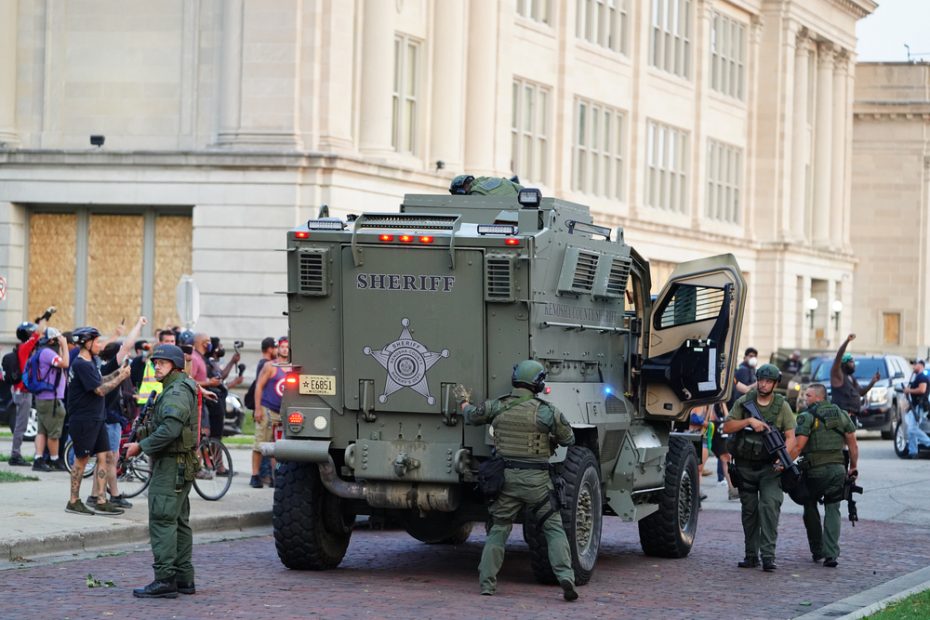 Police and fire department leaders insist that they really do need tanks to face extremist in Juneau, AK. They found themselves playing the role of car salesman to the locals on Monday trying to convince the assembly to support the purchase of an armored security vehicle, dubbed by some as a tank. All of them gave a lengthy pitch that was summed up as: you closed the deal on the vehicle, but you don’t like the color of it. The vehicle is a camouflaged large multiple personnel carrier which looks like a vehicle of war.

“I definitely think this vehicle needs to be a different color,” Assembly member Christine Woll said, referring to slide presentation photos of a monotone gray model of the big, boxy transport. “It can’t look like what we see in these pictures here. It’s a small thing, but I think it helps people understand what’s coming toward them in that moment.”

It comes down to the fact that most people would not want a vehicle that is used in wars patrolling their streets and now the assembly is trying to paint lipstick on a pig. The public and the assembly were startled when the plans to purchase a Lenco armored vehicle BearCat G3 became known. The BearCat is an all-steel armored vehicle that has room for 12 fully equipped officers or soldiers and can be used by police departments or other agencies for everything from rescues to extremist protests where they believe gunfire will be present. When was the last extremist protest in Juneau, AK just wondering?

The Police Department said that it would use the BearCat to respond to natural disasters such as landslides and avalanches where road access is almost impossible for their existing vehicles. They also said that they would use it under high threat situations, such as evacuating people from neighborhoods that are under gunfire, police chief David Campbell told the assembly committee as a whole with all seriousness. The police chief was caught off guard by the response from the assembly and the public. Assembly members noted that Lenco states on its website that the vehicle is used for military purposes and BearCat can be configured to include heavy duty weaponry. The police chief Campbell said no weaponry is part of the custom configuration of the vehicle. The department is purchasing it for $300,000 using a grant, and use it locally on situations where others pose a threat with weapons, such as an active shooter situation.

The assembly said that after the presentation they felt a little bit better about the department purchasing the vehicle but was concerned about reactions from residents about the department’s use of force policies following an officer involved shooting in 2019 that prompted months of heated debate and a lawsuit.

“I think that we still have a lot of work to do when it comes to the issue of police transparency and accountability,” she said, adding “I totally understand the need to have safety in mind when discussing these policies, but I think we should be discussing them more.”

Ketchikan, Alaska is accessible only by air and sea. Why do they need an armored vehicle? 🙄 https://t.co/fM9kzONpEc