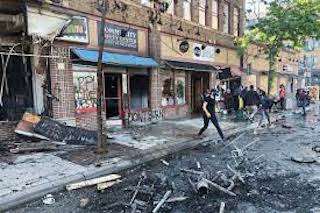 According to the US Census Bureau statistics released last week, Democrat-run cities like New York, Los Angeles, and Chicago, are experiencing urban population decline. Between 2020 and 2021 alone, New York lost an astounding 305,000 residents, while Los Angeles and Chicago had an estimated loss of 45,000. Other cities, such as Houston had a decrease of 11,000, Philadelphia 24,000, Dallas 14,000, San Jose 27,000, and Indianapolis 5,300. San Francisco also had a significant decrease of 55,000, or 6.3% residents, which is the highest percentage of any other city in the nation.

We will never forget that Democrats and their media partners surrendered downtown Minneapolis to the mob and let our cities burn. pic.twitter.com/gh2yEaRDIe

Explanations for these changes vary from city to city, but according to Breitbart, Inner city crime played a large factor in the mass exoduses happening across the country, ignited by the summer of fire in 2020. Cities like New York and Chicago started to see population decreases on a wide scale in the summer of 2020, but continue to experience a shrinking population due to the ongoing crime surge.

Earlier this year, Republican senators held a press conference on Capitol Hill to discuss how the rising crime waves across the country are directly connected to policies in Democrat cities that are soft on crime and like New York, have introduced bail reform legislation, making it harder to hold criminals accountable for their crimes.

After listing increase in gun crime in Chicago, New York City, and Philadelphia, Sen. Ted Cruz, "They're all run entirely by Democrats. They all have strict gun control measures that criminals don't follow, law abiding citizens are disarmed, the criminals are not." pic.twitter.com/gM2sIRkSjz

Between 2020 and 2021, these democrat cities with their progressive agenda, have seen record numbers in homicides, but the politicians behind these reckless policies show no signs of walking any of these policies back. Meanwhile, Joe Biden continues to blame the surge of crime in the nation on guns. In the past week alone, following the Uvalde, TX mass shooting, the President has called for the ban of 9MM pistols stating that a 9MM bullet “blows the lungs out of the body”. Biden has also placed the blame on Republicans, stating that their reluctance to pass gun control legislation has also contributed to the rise in crime.

Earlier this year in February, the President met with New York Democrats to discuss the rise of violent crime in New York City where he blamed the rise in crime there on the number of guns available.  But the New York Post reports that crime is on the rise in every category across the board with an overall increase in crime of over 35.2 from 2021. This past Memorial Day weekend in Chicago, 47 people were shot, and in Los Angeles last year, the number of homicides hit the highest number in 15 years. This year’s homicide count In Los Angeles represents about a 40% increase in killings compared to the same period two years ago in a state that has the strictest gun laws in the nation.

Guns are not the problem; progressive, woke policies are and this is where the reform needs to happen.