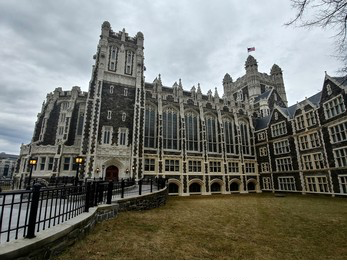 What is going on in New York City? When you think the news coming out of the Rotten Apple couldn’t get any more bizarre, it certainly does.

Meet Mr. J. Michael Steele, a  52-year-old program director with the City University of New York (CUNY) in the school’s Early College Initiative, tweeted a photo Thursday of a man — who appears to be him — standing in a classroom sporting a striped polo shirt, black sneakers, a face mask, and nothing else but a pair of skivvies.

https://t.co/QdYBmS5nqt
The director J. Michael Steele of a City University of New York’s Early College Initiative program that exposes city children to college curriculum appears in a photo without pants that was posted to social media.

“When it’s hot outside and inside. It’s Pom Pom shorts time. No kids were present for this blackmail photo,” J Michael Steele tweeted from an account that has since been made private. The LibsOfTikTok Twitter account tweeted the screenshot of the post he made.

The New York Post reached out to Steele, but he then denied the photo was of him but wouldn’t divulge who it was and hung up the phone.

“NYC … where you don’t have to wear pants to school as long as you’re wearing the damn mask,” one person on Twitter commented.

Steele is a former teacher and principal in Detroit and Massachusetts but now works in a program at a CUNY program supporting 20 New York City public middle and high schools and offers a mix of college-prep curriculum and the chance for students to get college credit. The program serves students in public schools in grades 6 through 12.

Steele wrote on his LinkedIn profile, “As an educator, I’ve learned that kids just want to be supported, appreciated, respected, heard, understood, and loved. They want to know we’re human and not spokes on a wheel that leads them nowhere. That’s all. That’s it. It’s about them, not me.”

Joseph Tirella, a spokesman for the university, said, “CUNY is committed to providing an appropriate learning environment for all its students. This post was brought to our attention and subsequently removed and appropriate action is now being taken. As a matter of policy, we do not comment on personnel matters.”

This is just one of many instances where educators have been caught doing inappropriate things in the classroom — with or without students being present –. but it is undoubtedly the first time one of them had the nerve to post a photo to their Twitter account.

Last May, Amanda K. Fletcher, a Spanish teacher for Columbia Secondary School for Math, Science, and Engineering was reassigned in October 2021 following a Special Commissioner of Investigation report which stated that she “appeared to suck the nipple of an unidentified topless male,” while “gyrating” or “rocking back and forth,” all while on a zoom call with her students. Fletcher remained on the DOE’s payroll and made $105,588 in 2020 but couldn’t give a legitimate explanation for her lewd conduct. The DOE promised to “pursue disciplinary action” against her and others who were cited for inappropriate behavior, while the Special Commissioner of Investigation merely suggested that the school improve their teacher training on “appropriate and acceptable behavior while interacting remotely with students.”

The question that many people are asking is, why on earth do you need special training or retraining to be taught that this behavior is unacceptable in the first place? There just doesn’t seem to be any rhyme or reason for it, and in the end, there doesn’t seem to be any just accountability. There is no wonder in my mind that between the asinine mask mandates and the tomfoolery in NYC classrooms, why New York City schools are hemorrhaging students as more and more parents opt for homeschooling. Our children deserve better than this.

If you’re digesting the latest twist in NYC’s school budget case, take time with this explainer on the heart of the matter: declining enrollment.

In which grades is enrollment is dropping the most? Why are numbers down? What should city leaders be doing? https://t.co/6KrIquyXfN