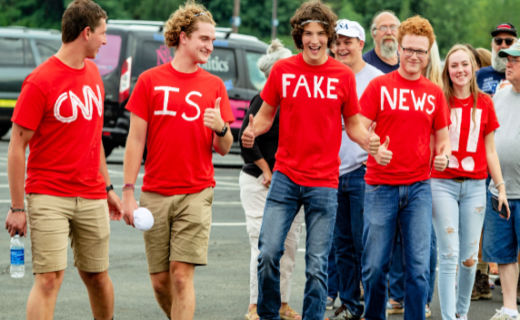 It could be argued (correctly) that it takes copious amounts of liquor to watch CNN, unless of course you are an unhinged leftist. Being inebriated is pretty much the only way to watch the far-left clown show of fake news otherwise known as CNN without going full Elvis Presley mode and shooting your television. Be that as it may, CNN is pressing on and attempting to portray themselves as more than the “World Weekly News” of cable news and limiting the amount of alcohol their “talent” can consume on air on New Year’s Eve. Now, I’m not sure who the sad, joyless folks that are watching CNN on New Year’s Eve are and suffice to say I NEVER want to party with any of them, but apparently someone is, and now Anderson Cooper and the rest of the clown show can’t get three sheets to the wind. Check this out.

CNN President Chris Licht will reportedly not allow employees to drink during the network’s broadcast of New Year’s Eve.

Licht, who will be in CNN’s control room on New Year’s Eve, is trying to rebrand the network as a serious news channel. A part of the changes under Licht’s direction will be sobriety among CNN’s employees during the New Year’s Eve telecast.

While it may be too late to save CNN, as the Trump Derangement Syndrome seems to be far too advanced, credit Licht with at least attempting to restore some degree of integrity and professionalism. Who wants to watch Anderson Cooper struggle with tequila shots?

This year, Licht said in one internal meeting that Cooper and Cohen will be permitted to imbibe, prompting Cooper to tell network leadership he’s concerned at the perception that only the two white hosts are permitted to drink.

Licht then walked that rule back: “Chris made an offhand remark in a town hall about drinking during the NYE program,” an aide said. “Shortly after, he proactively reached out to Anderson to clarify that his comments were meant as a joke and that he preferred no drinking on air at all.”

Apparently, the joke is on Cooper. He could have simply followed managements direction and had a good time throwing down fuzzy navels on New Year’s Eve, but he had to let his white guilt get in the way and virtue signal himself into sipping water instead. Cooper is barely watchable sober, and though not much better drunk, at least he softens some of the annoying edges. But again, who the hell is watching CNN for NYE?

The changes to the primetime broadcast come after CNN was roasted for showcasing “raunchy” tweets posted by pranksters live on air.

The broadcast was hosted by anchor Anderson Cooper and Bravo executive Andy Cohen, who appeared to be inebriated. The two were seen on live air tossing back tequila shots. Cooper was also heard loudly moaning during the drunken scene.

"Ben Dover" and "Dixie Normus" piped up with tweets that scrolled along the bottom of CNN's screen New Year's Eve. https://t.co/7D2JfUwVSz

Understandable that no one wants to hear creepy Anderson Cooper moan on live television. Talk about ruining the moment. I didn’t watch but I assume Cooper moaned right around the moment the ball dropped. The raunchy Tweets are about the only thing entertaining about CNN on NYE, so if those are going to be off the table there isn’t much reason to watch. In fact, I may pull an old episode of Dick Clark’s New Year’s Rocking Eve off of the internet and try to forget about 2022.