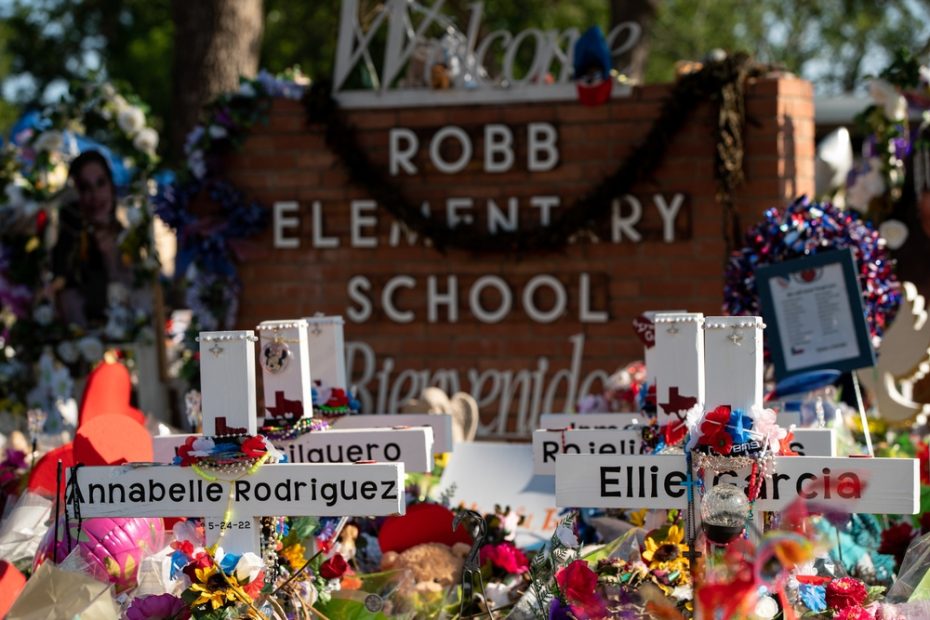 Disgraceful footage of cops inside Robb Elementary School during the Uvalde massacre show officers restraining a colleague whose daughter was murdered in the school before using hand sanitizer in front of him.

The leaked footage shows two cops holding onto sheriff’s deputy Felix Rubio’s shirt as the distraught father as he wipes away tears while the shooting was taking place in the school.

Knowing his 10-year-old daughter was inside the building and would later be found to be one of the 19 children killed in the shooting, Rubio put his hand over his mouth in horror as children can be heard screaming in the background.

Appallingly, one callous cop pumps antibacterial gel onto his hands after having touched Rubio.

Alexandria “Lexi” Aniyah Rubio, 10. Lexi had received the good citizen award and recognized for All-A honor roll at the award ceremony just yesterday .“We told her we loved her and would pick her up after school. We had no idea this was goodbye,” her mother says. #uvaldevictims pic.twitter.com/6Immyjgjwi

The 77 minute-long footage, clips of which have been played across news channels, shows the carnage unfolding inside the school. Kids can be heard panicking as gunman Ramos approaches the building.

In a later segment, a young boy can be seen hiding behind a corner in a hallway as the gunman approaches before running in the opposite direction.

Cops at the scene who are already facing mass public scrutiny for the time it took them to attempt to stop the attack, having cowardly waited outside the school for around 40 minutes while the children and their two teachers were being shot.

With the release of the CCTV tapes which were first obtained by The Austin-American Statesman, the world can now see the spineless way officers behaved once they eventually set foot in the school’s corridors.

As a 17-cop convoy storms the building and begins to move down the hallway, officers can be seen running away as gunfire sounds in the classroom.

The tapes reveal that the painfully cowardly cops stalled for around 77 minutes in the school’s hallway as the occupants of the classroom endured more than 100 rounds of gunfire from Ramos. Officers can be seen checking their phones and fleeing back as shot after shot was fired.

WARNING: This video will change you.

Footage of the shooter and the police response from inside Robb Elementary in Uvalde, TX.

During the footage, a message appears on the screen to say that the sound of children screaming has been removed.

Officer Rubio’s daughter, 10-year-old Alexandria Aniyah Rubio who was known as Lexi by her friends and family was one of the 10 children killed as cops waited outside the classroom.

Meanwhile, Uvalde’s mayor, Don McLoughlin has attacked the media for releasing the damning footage. He repeatedly said the clip was “chicken”:

“The way that video was released today is one of the most chicken things I’ve ever seen,” he said.

After which a member of his council piped up with: “the mayor said that it was ‘chicken’. It was chickensh*t”.

McLoughlin has also come under fire from the victim’s families as he demanded they remove the memorials for their loved ones outside the school.