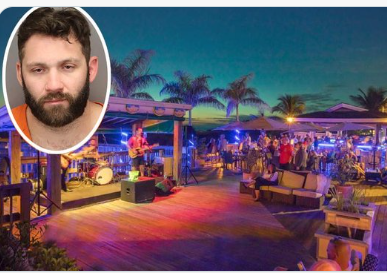 There’s something about the Sunshine State that makes people do crazy things. The phenomenon of the “Florida man” is well documented. Generally, if you see a story about someone walking nude in the middle of the road or punching someone through the drive through window of a fast-food restaurant or riding an alligator, the first thought is Florida. Always a good time in the Sunshine state. Whether it is the heat and humidity, the drugs, or in this case the booze, people do insane things in Florida. Check this out.

Henry Capouch, 30, was arrested in the early morning hours on Monday after an incident with a resort employee. According to police, the Chicago police officer was spotted “pissing on the ice in the machine” by an employee at Jimmy B’s Beach Bar in St. Petersburg.

The employee confronted Capouch in an attempt to get him to stop peeing on the ice. He was verbally and physically assaulted by the Chicago cop for doing so. A security guard, who was also pushed by the vacationing officer, witnessed the confrontation.

Who’s pissed off about the murder rate in Chicago? https://t.co/HDMzbJ8C3F

The resort employee apparently pissed off the off-duty Chicago cop, and he responded in kind. Except it’s not ok to sprinkle tinkle in an ice machine anywhere in America. That’s the stuff you’d expect in Canada, where they have been eating yellow snow for hundreds of years. The physical assault of the employee preventing the tainting of the ice only made matters worse for Capouch. After the incident, the man and his girlfriend hung out on the beach as if he hadn’t just kicked an employee’s ass and peed in the ice machine. Again, only in Florida. Naturally, the cops showed up.

After the confrontation, he and his girlfriend went to hang out on the sand nearby. Once there, he was confronted by police and resisted arrest.

After resisting Capouch was arrested on a simple battery charge. Police noted in the arrest affidavit that there was an “indication of alcohol influence.” Later that morning he posted bond and was freed to finish up his vacation.

From my experience the vacation would be done the minute the cuffs were slapped on, if not the minute the ice turned yellow. It wouldn’t take going to jail to make me realize maybe I need a 12-step program and to get the hell out of Florida. I’m sure patrons of Jimmy B’s Beach Bar in St. Petersburg as well as Jimmy B himself would agree. Certainly, being a cop in Chicago, arguably one of the most dangerous and crime infested lib hell holes in America is stressful, and one would need to unwind and blow off steam on occasion. However, the steam can’t be coming from the ice machine at Jimmy B’s. That’s just rude, and people in the South don’t take kindly to rude Midwesterners whizzing in the ice. Just go pee in the ocean like civilized people do.

Capouch has been an officer with the Chicago Police Department for five years. Will he make it another five years? If peeing in the ice machine doesn’t cost him his job, then he might want to reconsider where he vacations.

Excellent advice. Florida is a deep red state, not a yellow one. Capouch might want to take his next vacation somewhere that he won’t be tempted to drop his drawers and ruin everyone’s drinks. Maybe Michigan, California, or New York? Those states have been pissing us off for years anyway, maybe it’s their turn.