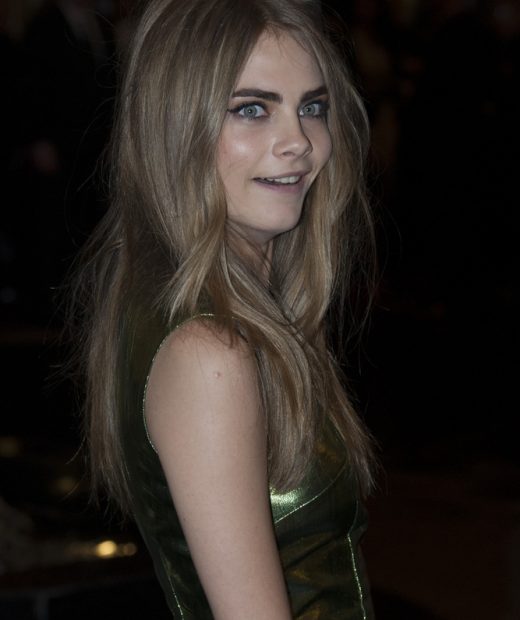 The family of supermodel Cara Delevingne is reportedly concerned for her wellbeing after the cover girl has been spotted behaving increasingly erratically.

The former face of Dior and Rimmel worried fans when she was filmed looking disheveled and smoking a clear pipe in a car outside Van Nuys Airport in Los Angeles on Monday.

The star was photographed with her shoeless legs dangling from the back window of the black SUV before emerging from the car with matted hair and a gaunt face.

Delevingne, who was wearing a black Britney Spears t-shirt, black trousers, and orange socks with no shoes, staggered around the airport loading bay with her Jack Russell, Alfie.

The ‘it’ girl looked extremely jittery as she continually spanned around, side-stepped, and sat down on the sidewalk while she spoke on her cell phone and smoked a cigarette. She then gets up again and continues to spin around before sitting on a bench.

According to sources, Delevingne was two hours late for her flight on Jay-Z’s private jet. The Suicide Squad star’s bags were loaded onto the plane and she boarded the flight with the dog. Around 45 minutes later, the model left the plane again as it stood on the runway.

It is not yet clear why she left the flight, but Delevingne continued to behave strangely on the tarmac before leaving in the same black SUV she arrived in.

Sources close to the cover girl said she had been returning from the Burning Man music festival where “she had just spent days in the desert, not eating all that much and she looked disheveled because she hadn’t had time to scrub up yet.”

The source went on to say that her “friends are worried about her generally after some erratic behavior, but she has a good group around her. Her sister was at the festival with her. She wasn’t alone and she has her back.

“Burning Man isn’t lined with burger vans like other festivals. You chuck everything you need in an RV and that’s what you have to live on while you’re there. Everything works on a swapping system.”

But this isn’t the first time Delevingne has been snapped looking a far cry away from glamorous. As she celebrated her 30th birthday, photos emerged of the model and actress looking worse for wear, with bruised limbs and blotchy skin.

During an interview with Jimmy Fallon in July, viewers could see the model’s hands visibly shaking as she performed a card trick for the camera.

“Can you see how much my hand is shaking?” she asked Fallon, to which he responded, “Yes, is that part of the trick?”

While some of her friends have suggested that Delevingne, who has earned over $50 million from her modeling career alone, finds the photographs funny, some close friends are more worried about her health, and revealed that her family has intervened:

“We are all incredibly concerned. The situation has been building for a few weeks now, and Cara’s family is involved,” said the close friend.

“There is talk of staging some kind of intervention and making sure Cara gets the help she may well need.

“She has been burning the candle at both ends of late, and it’s clearly taking its toll.”