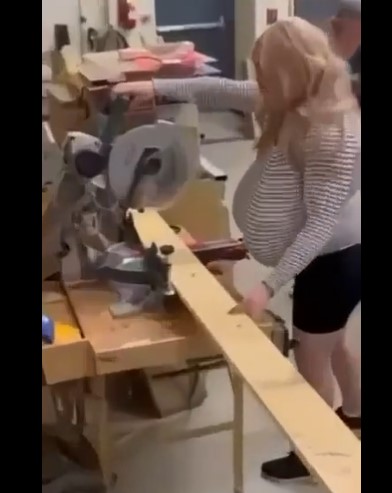 Big, big news from the Great White North. Halton School District in Ontario says it will begin suspending Oakville Trafalgar High School students for snapping pics of a local mountain range. So, I realize it’s Canada, and Canada is a Socialist nightmare, but since when is taking picture of mountains an egregious offense? Well, when they aren’t real and are attached to the local transgender high school shop teacher is when! Duh! Confused? You should be. Everyone should be, especially the shop teacher, who clearly has divorced him/herself from reality long ago. Reality got the house and car, and the shop teacher apparently got custody of the kids. Check this out, but don’t stare.

Students at a Canadian high school have been warned to stop taking photos of trans shop teacher Kayla Lemieux and her hard-to-miss massive size Z prosthetic boobs or there will be consequences.

At least we know what one consequence won’t be, having to hold their backpack in front of them or be forced to sit to conceal their joy with Mr. Lemieux’s massive fake boobage. I would also be remiss if I didn’t mention that Lemieux is perhaps the most Canadian name ever. I digress.

I don't remember my shop teacher looking like this🧵 pic.twitter.com/pHHr58Zspa

Due to the injury, Lemieux has been transferred from normal shop teacher duties, including showing the kids how to handle a miter saw, to a role in the district as a substitute teacher in normal classrooms away from saw blades.

Witnesses tell the Toronto Sun that Lemieux is now receiving extra attention from a police security detail that has been positioned at schools where the international superstar and the fake plastic cans show up for substitute gigs.

So, why hasn’t the school district put an end to this freak show? Because it is Canada could be one reason, but more straight to the point would be simple fear of litigation from Twin Peaks for discrimination. Even though no one in their right, or wrong mind for that matter could look at the teacher or situation and say, “you go queen!” the school still feels the need to err on the side of NOT getting their snow pants sued off of them.

“Even a truly reasonable and non-discriminatory dress code or grooming standards would most likely fail to achieve the HDSB’s intended goal of being an employer that fosters a culture of professionalism, respect, equity and inclusion,” a district representative told the Sun.

It’s hard enough to deal with the hormones, pressures and expectations of high school, even in Canada without such a giant set of distractions. Now these poor kids can’t even make memes. Only in Canada.